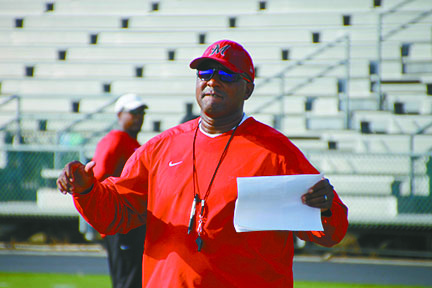 Port Arthur Memorial’s football team started practice a week later than most of their nearest 5A counterparts. That was just one more week the Titans had to remember what they learned during spring ball.

“Our kids are retaining a lot of information from the spring with a lot of energy and enthusiasm,” coach Kenny Harrison said late during Monday’s practice. “Our main focus is get a win each and every day, one day at a time. That’s how our kids approach this season — one game at a time, just like we’re approaching one practice at a time.”

Memorial will take the field for the first time this season in a three-period scrimmage at Humble Atascocita at 11 a.m. Friday, just one week before beginning the regular season at home against Beaumont Ozen. The way Harrison looks at it, the Titans may as well play it like a real game as the season kickoff nears.

“Anytime we scrimmage, it’s a game-type situation,” he said. “It’s not a controlled scrimmage. The kicking game’s live, everything’s live. It’s three quarters of game situation. It’s good for our kids because we play the following week against Ozen, so it’s good to get an opportunity.”

Already this summer, the Titans feel they have chalked up a victory of sorts. No major injuries have stricken the team in preseason camp, something they couldn’t boast last year.

“Around this time last year, we lost one of our defensive backs in JaCorie Jones,” Harrison said about the current Texas-San Antonio cornerback. “He went out on the first day of two-a-days. Anytime you lose a kid like that who’s a Division I player and returning starter, that’s tough to replace.”

Injuries in large part also hampered the Titans during a 3-7 season last year.

Just staying healthy throughout the scrimmage and minimizing mistakes as well as being sound on special teams are Harrison’s goals for the Titans on Friday. “If we do that, we should be in good shape,” he said.

The defense got off to a good start in camp, Harrison said, adding the offense is starting to come around. The start is great sign for a defensive unit that held the opposition to 318.6 total yards per game in 2014, but gave up 450 or more yards three times.

Harrison has plenty to look forward to offensively with the return of senior Kameron Martin and two more seniors in the backfield, Marcus Younger and Vernon Chaisson.

Yet the first standout in camp Harrison mentioned when asked was sophomore Keitha Jones, whom the coach said will be used at receiver, cornerback and defensive back. Jones also backs up Harrison’s son Kadon at quarterback.

“I wouldn’t say [he’s a] surprise, but he’s made a major impact on this football team,” Kenny Harrison said.

Jones was part of a 2014 freshman team that went 9-1, and the coach is looking forward to plugging the new sophomores right into varsity action “and keep going.”