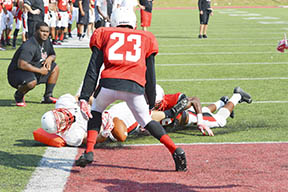 BEAUMONT – One of the main aspects of Lamar’s first preseason scrimmage Saturday was the quarterback battle between Stephen F. Austin transfer Joe Minden and Navarro Junior College transplant Carson Earp.
Surprise, there’s another guy in the mix.
Another transfer – sophomore Blake McKenzie — came on the Provost Umphrey Stadium shortly after Minden started and began to make his mark on the QB race. The Corpus Christi product completed his first two passes and showed off his ability to escape and complete plays under pressure, finishing 10 for 15 during the scripted-play scrimmage that went a little more than an hour.
“I like to throw every play, but I can use my legs and make some plays as well,” McKenzie said. “So I just keep my eyes on the field.”
Cardinals coach Ray Woodard didn’t have much information on McKenzie’s background. The quarterback is listed as Charles McKenzie on the practice roster – Blake is his middle name – but he isn’t included in the team’s media guide.
“He didn’t come in with any preconceived idea that he would move up and compete,” Woodard said. “He’s moved up and he’s competing really well.”
McKenzie, a walk-on, spent the 2013 season at Fullerton (Calif.) College as a redshirt and played last year at Riverside (Calif. ) Community College. He enrolled at Lamar during the second summer term, but Saturday he didn’t play like a guy that was a spring session behind Minden and Earp.
“I was in the playbook a lot, but these two [Minden and Earp] helped me out a lot,” McKenzie said.
On one play, he was touched in the pocket by a defender for what would amount to a sack in scrimmage, but he continued the play, dodged to his right and threw across the field to freshman Duncan McVey for a 39-yard completion.
Minden, who was 7 for 7, wasn’t without his highlights. He hit Keegan Mitchell on a screen and the true freshman running back from Corrigan-Camden turned it into a 60-yard touchdown speeding down the right-hand sideline.
“I hate to call out a freshman, but you guys saw it, too,” Woodard said, asked who stood out in the scrimmage. A Corrigan-Camden alumnus himself, he joked that Mitchell was the second-best looking recruit from that high school.
Senior Devonn Brown also had a 26-yard scoring pass from Minden and hauled in a 43-yarder from Earp, who completed 4 of 6. Senior running back Kade Harrington also scampered five yards for a TD.
Whether any quarterback separated himself three weeks before the season opener at home against Oklahoma’s Bacone College, Woodard didn’t want to get into that just yet. But Minden analyzed the battle as it is.
“I think we’re all just helping each other out,” Minden said. “We’re just trying to be the best players we can for the team. At the end of the day, our goal is to win the conference and be the best offense in the league. So, we’re all pushing each other to be the best we can be because you never know who has to be the one to step up and make plays.”
Asked if any quarterback separated himself from others for a starting role, Woodard said: “Yes.”
Asked specifically about the quarterback race: “No.”
And he didn’t want to go into the race for other starting positions, either. “We’re still competing,” he said. “After next Saturday’s scrimmage, we’ll start narrowing it down with about two weeks left (before the Bacone game). We just want to have a good week of everybody competing.”
Woodard said it’s tough to discern which side of the ball had a better scrimmage when it’s an intrasquad contest, but said both the offensive and defensive units had good outings.
“I was pleased with both sides at times and not both sides at times, and obviously we’ve got a lot of work to do, but I’m happy with our effort today.”
Woodard said next Saturday’s scrimmage will have more special teams involved. “It will be as close to a game as we can get before we actually play,” he said.

Dauphine voted as track athlete of the year

The accolades are still coming in for former Port Arthur Memorial track star Corey Dauphine. This time, though, it was... read more