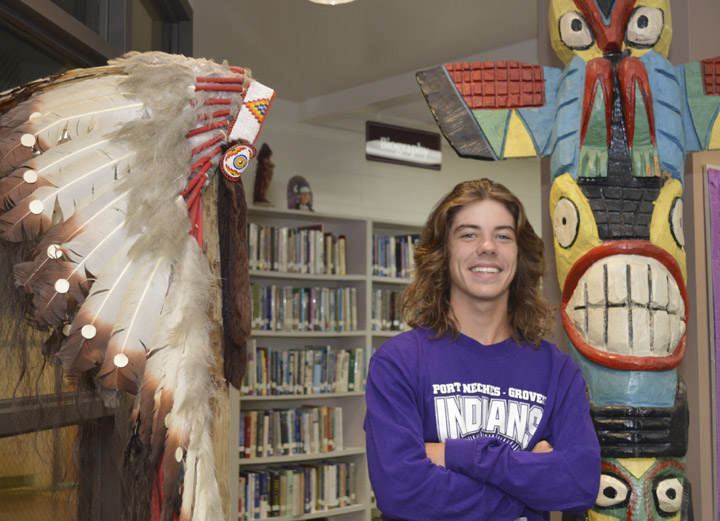 Zac Nelson, the 2015-2016 Indian Spirit at Port Neches-Groves High School, is ready for the role he has dreamed about since childhood. Mary Meaux/The News

By Mary Meaux
The News staff writer
PORT NECHES — Valton Jobe made a lasting impression on the 2015-2016 Indian Spirit Zac Nelson.
Jobe, known by Port Neches-Groves High School football fans as the “2 bit man” for his bleacher cheers, was the first person Nelson saw as a child that emanated school spirit.
“It was the ‘2 bits man’ who inspired me,” Nelson said.
The 17-year-old has aspired to be the Indian Spirit since childhood. A photo on Nelson’s cell phone shows him as a child in either the first or second grade dressed as the Indian Spirit.
Pat Briggs, assistant principal/student activities director, explained that Nelson had attended an Indian Spirit/Cheerleader Clinic that is presented annually which allowed the young Nelson and others to take to the field and show their new skills.
Nelson began ticking off the names of past Indian Spirits, adding that the one he met as a child was Ross Youngblood.
Taking on the role of Indian Spirit is considered an honor.
“The Indian Spirit is also a role model to all the kids in Port Neches and Groves, they look up to the Indian Spirit as I did when I was a child,” he said. “This is literally a dream come true. I know that sounds cliché. When I entered high school I knew that I was going to try-out. It’s unreal — I’m actually the Indian Spirit.”
Briggs believes Nelson has all the characteristics to make a good Indian Spirit.
“Zac is so enthusiastic about being our Indian Spirit next year,” Briggs said. “He will promote school spirit for our communities very well and be a positive representative for PN-G.”
To audition for the position applicants must attend a clinic where they are tutored by that year’s current Indian Spirit. Then each person must try-out in front of the whole student body who then vote on the best person for the job. Votes are tallied and the results are announced at the end of the school day.
Students who do not earn the role still play an important part as members of Geronimo’s Crew. The G-Crew are a support group for both the Indian Spirit and the cheerleaders.
The Indian Spirit dresses in a specific outfit which includes a headdress, face paint, a purple tabard (sleeveless garment), black pants, moccasins with bells on the shin guard and a decorated back plate.
This outfit has been passed down from one Indian Spirit to another. The only part that varies is the shield. Nelson’s shield features a symbol of an Indian Spirit.
When he’s not stirring up school spirit Nelson enjoys long boarding, skateboarding, swimming and is also interested in film. He plans to attend college to study film with the goal of directing, producing and editing, he said.
The high school senior will have one year to hold the position of honor and tradition and to set a good example for others.
“I’m going to do everything I can do to be the best Indian Spirit,” he said.
E-mail: mary.meaux@panews.com
Twitter: MaryMeauxPANews