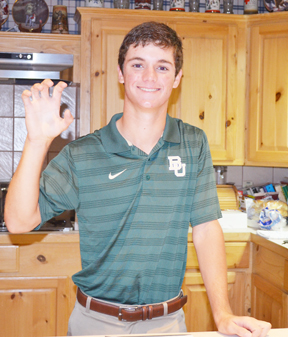 Nothing like jumping off into really deep water to find out how good a swimmer you are.
That’s essentially what former Port Neches-Groves star Braden Bailey will be doing next Monday when he tees it up at Olympia Fields Country Club in Chicago against the toughest and deepest field in amateur golf. The Baylor freshman will be one of 312 players from around the world battling for the U.S. Amateur Championship and the berths in the Masters and U.S. Open that go with it.
The U.S. Amateur, for those who are not aware, has long been the Super Bowl of amateur golf. It’s an event that dates back to 1894. Among the former champions are Bobby Jones (five times), Arnold Palmer, Jack Nicklaus (twice) Phil Mickelson and Tiger Woods. Tiger won it three consecutive times in the mid ‘90s before turning pro.
Just getting into the ultra-elite field was Braden’s greatest accomplishment to date, and required him surviving a playoff with Baylor’s No. 1 player, Andreas Gjesteby, last month in a qualifier at The Woodlands. Getting to Chicago would drop to his second greatest feat if he’s one of the 64 who reach the match-play portion after 36 holes of medal competition over the North and South Courses at Olympic Fields.
The host course, by the way, is a venue with considerable history. Built in the early 1900s on the south side of the Windy City, it was the scene of U.S. Opens in 1928 and 2003, the PGA in 1925 and 1961 and the U.S. Senior Open in 1993. Major champions there include Walter Hagen, Jim Furyk and Nicklaus.
Bailey, who took finals in two summer school courses at Baylor on Tuesday, is somewhat aware of the history and well aware of the challenge of the U.S. Amateur. While he’s excited about his opportunity, in typical low-key fashion he doesn’t seem to be overwhelmed.
“I haven’t really thought a lot about it, but I know it’s going to hit me when I get there,” he said. “I realize I’m going to be competing against the best amateurs in the world. Playing in it is going to be such an honor and a truly amazing experience.
“I want to go up there and play well. My goal is to make it to match play. If you do that, anything is possible. No matter what happens, it is going to be something I will always remember. To be able to say you played in the U.S. Amateur is pretty special.”
Aside from parents Brad and Darla Bailey, and sister Brynna, few will be watching with more interest than Baylor’s second-year coach Mike McGraw. McGraw, who has been part of three national championships, including one as the head coach at Oklahoma State in 2006, was an assistant at Alabama when Bailey committed to the Bears. He’s thankful to predecessor, Greg Priest, for selling Bailey on Baylor.
“I image he would have gone to Lamar if Greg had not done such a good job recruiting him,” said McGraw. “I had not recruited in Texas for a while, so I didn’t know anything about Braden when I took the job. I did some research on him, then was pleased to see for myself what a good player and person he is. With him, everything is ‘yes sir and no sir.’ That’s nice.
“Everything I’ve seen from him has been impressive. I love how competitive he is. He is a much tougher competitor than his exterior would lead you to believe. He’s fiery on the inside. That struck me the first time I watched him play.”
McGraw isn’t sure what to expect from his freshman at the U.S. Amateur. He’s not about to sell him short, but says he’d be thrilled if Braden can advance to match play.
“He’s going to get a good measure of where he stands against the very best amateurs,” said McGraw. “I think we’ll discover he compares favorably. He’s a very good, strong player. For his size, he’s pretty long off the tee. He has one of the better swings I’ve seen. Aesthetically, it’s beautiful. When he gets on the weights and adds a little more strength, he’s going to be explosive.”
So is there a player of somewhat similar physical stature that comes to mind for McGraw when he looks at Bailey?
“He reminds me of a young Justin Leonard,” said the Baylor coach. “He’s not as accomplished at this point as Justin was, but there is some similarity. He’s got the tools and very much wants to become a really good player. My job is going to be to guide him through the next four years and help become the best he can be. I can’t wait for the journey.”
Neither can Bailey who, beyond the obvious, is getting an added bonus from playing in the U.S. Amateur. Olympia Fields just happens to be the site of Baylor’s second fall tournament — the 54-hole Fighting Illini Invitational in mid September.
By then, Braden should be well acclimated to deep water and to the sharks who swim there.
Bob West is the Port Arthur News golf writer. He can be e-mailed at rdwest@usa.net