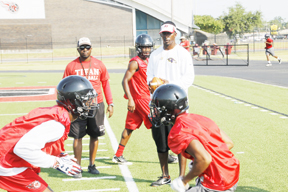 Monday could not come soon enough for Kenny Harrison and his Port Arthur Memorial Titans.
The Titans were on the practice field and were ready to start the process of putting 2014 in the past.
Memorial went 3-7 last year and missed the playoffs for the first time since 2007.
“We were looking forward to this,” Harrison said. “Everybody understands last year was below our expectations and below my expectations. We are going to take it one day at a time and win each and every day.
“I have had a bad taste in my mouth since the North Shore game last year. I have been looking forward to getting back out here. I couldn’t sleep last night and I was up early this morning. I was at the school at 5 a.m. waiting for the day to get started.”
North Shore beat Memorial, 40-28, in the regular season finale last year.
Memorial had a special guest at practice on Monday as MHS graduate and NFL player Danny Gorrer was on hand to work with the Titans players.
Gorrer is a free agent while he rehabs after ligament damage to his knee. The injury ended his 2014 season. He played four games for the Baltimore Ravens and recorded 17 tackles and one interception.
“Not being in training camp right now, I enjoy helping these guys out and giving back a little bit to my community,” Gorrer said. “It gives me a chance to get back into the football grind.
“It is a blessing to give back and share the knowledge I have learned. It means everything thing to me. They had a rough season last year. There is nothing you can do about that but leave it in the past. They have been working to get back on track and get back to that winning tradition here in Port Arthur.”
Memorial opens the season Aug. 28 at home against Beaumont Ozen.