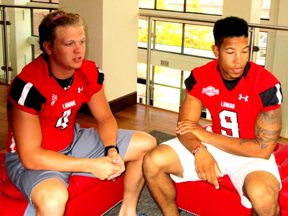 By Tom Halliburton
News sports correspondent
BEAUMONT — Lamar’s third-place tie in last year’s Southland Conference football standings apparently was a fluke. That’s how SLC observers must have viewed it.
Coach Ray Woodard and veteran receivers Reggie Begelton and Jayce Nelson chirped similar tunes Monday at media day about the Cardinals’ lack of SLC and area respect.
Woodard said a few uninformed fans approached him during the off-season without realizing his 2014 team captured eight wins or defeated McNeese State. And it’s fine with Big Ray if Lamar remains a well-kept secret at the start of the 2015 season.
Respected or not, Begelton and Nelson were a bit ambushed when the league’s pre-season poll placed Lamar a lowly eighth.
“I thought about sixth,” Port Neches-Groves product Nelson said. “I thought we would be picked higher than eighth, that’s for sure.”
West Brook senior Begelton also anticipated a fifth- or sixth-place pre-season ranking.
“Until we win the conference consistently, we’re not going to get any respect,” Begelton said. “I guess losing a quarterback makes us go that far down.”
Nelson and Begelton own ideal vantage points to observe Lamar’s battle to replace record-setting passer Caleb Berry.
Senior Joe Minden possesses the additional amount of SLC experience during his three years at Stephen F. Austin. Junior Carson Earp offers the extra dimension of height and running ability.
“I think leadership-wise that Joe has the command in the huddle,” Begelton said. “Carson is more laid-back and lets things flow.
“It’s a very competitive position and both are getting reps with the first team. We will get to see a lot in our scrimmage on Saturday.”
Nelson happily will receive passes from either quarterback candidate but he can detect the difference in the two’s passing skills.
“One (Minden) is better at throwing from the pocket and one (Earp) is more comfortable at throwing on the run. That’s the biggest difference.”
Woodard reiterated last week’s assessment that neither player had distanced himself as the starter.
“I think both are further along than where Caleb (Berry) was two years ago,” the LU boss said. “They just run the offense. They don’t force it and turn it over.”