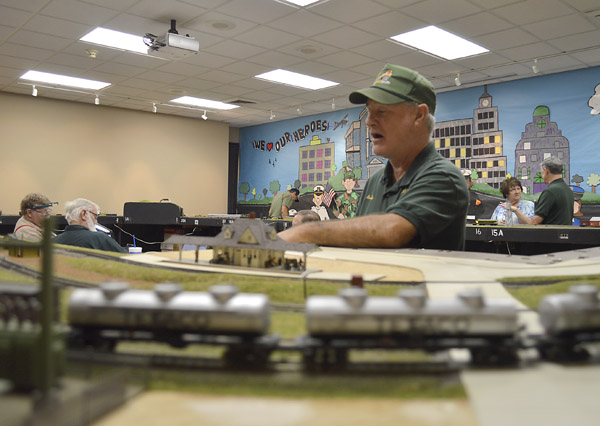 PORT NECHES — Model train railroad cars of various types moved around the tracks and even through a tunnel with all the lights and sounds of their real counterparts in the community room at the Effie and Wilton Hebert Public Library on Thursday.
Inside the 16-foot X 28-foot track area members of the East Texas and Gulf Train Modelers Association tinkered with laptop computers, sound boards, train pieces and remote controls as library patrons oohed and aahed at the artistry and precision of the working model trains. 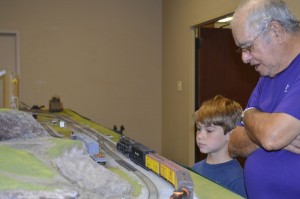 “This is amazing. I love it,” Cruz Maciel of Port Neches said as his grandson Nolan Pipton, 8, watched the trains pass each other on the tracks.
The model train aficionados brought along the latest diesel locomotives running side-by-side with steam locomotives, different railroad cars such as grain hoppers and coal hoppers, passenger depots, industries, scenery and a railroad tunnel for Model Trains in (Loco)motion.
The free exhibit is open from 9 a.m. to 5 p.m. Friday and from 9 a.m. to 3 p.m. Saturday at the library, 2025 Merriman St., Port Neches. 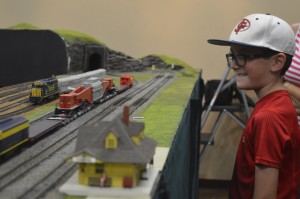 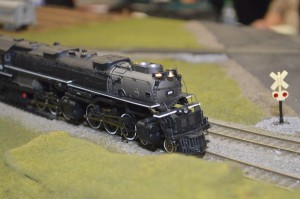 Model Trains in (Loco)motion at Thursday at Effie and Wilton Public Library in Port Neches on Thursday.
Mary Meaux/The News

Curtis and Martha Hall brought their grandson Caden Hall, 8, to see the trains.
“I love them,” Caden Hall said. “It’s so neat how they look and move.”
Les McMahen, along with Randy Williamson, Jeff Hamilton, Wayne Meaux, George Barnes and Mickey Taylor have long been fans of model trains.
“We have grain hoppers, refrigerator cars, box cars, tank cars and a Schnable car which carries large weights such as transformers,” McMahen said.
As he spoke, the trains moved around the tracks passing landmarks such as a pickle factory, coal hopper, grain hopper, the “Pairodice” depot and “Faith Hill” where a tiny replica of Ray Charles is pounding away on a piano with country singer Faith Hill nearby.
Library Director Mark Durham said patrons had trickled in steadily Thursday as the group laid out the exhibit.
“We are hoping to offer more programs of interest to the community,” Durham said.
E-mail: mary.meaux@panews.com
Twitter: MaryMeauxPANews 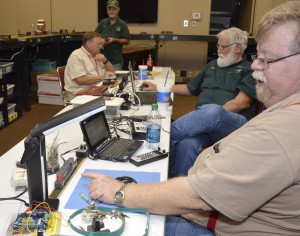 Wayne Meaux, right, checks settings on a model train along with Jeff Hamilton and George Barnes as Randy Williamson, back, works a remote control in a behind the scenes photo during Model Trains in (Loco)motion at Thursday at Effie and Wilton Public Library in Port Neches on Thursday. The men are members of East Texas and Gulf Rail Modelers Association, Beaumont, Tx.
Mary Meaux/The News 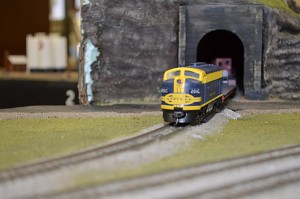 A scene from Model Trains in (Loco)motion at Thursday at Effie and Wilton Public Library in Port Neches on Thursday.
Mary Meaux/The News