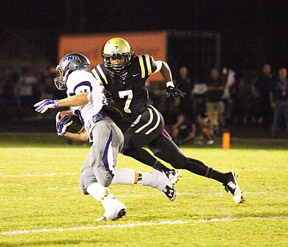 NEDERLAND — Nederland junior safety Tavian Mayfield had a message for his defensive line teammates Wednesday when he ran off the practice field.
The line was charged with doing extra running after everyone else had left. When Mayfield ran by them after being interviewed, he yelled out to make sure they continue to work hard.
One teammate told Mayfield to have fun working out and he simply responded at the jab with “Oh, I’m going to do mine.”
Mayfield was making sure his teammates understand the hard work was not a problem in his mind.
Then he received a huge compliment from his coach, Larry Neumann.
“We have talked about some players through the years and we use the word savvy,” Neumann said. “They understand the context of the game and goes beyond the blackboards and the X’s and the O’s. He is one of those guys. There was another guy who was maybe the best in Nederland that I have ever seen and his name was Sage Seay.
“He had savvy and Tavian has savvy and that is going to continue to develop. Along with his skill set, that is what makes him so important on both sides of the ball.”
Mayfield admitted he has seen some Nederland players out of shape and he is not worried because the Bulldogs are working hard to defend their district title. The Bulldogs shared the title last year with the Beaumont Central Jaguars.
“We are becoming a new team and building our stamina,” Mayfield said. “We have to keep running and be healthy.”
Mayfield said what makes a Nederland practice different is the amount of fun the Bulldogs mix in with the hard work.
“You have to have fun when you are playing ball,” Mayfield said. “It makes practice better and at the same time you have to be serious.”
There is a certain 2015 graduate Mayfield has missed the most this year. As a sophomore last year, he played along side his brother Leon Mayfield who was a standout linebacker for the Bulldogs.
“I miss my brother out there,” Mayfield said. “He was a big impact on the team and I miss him so much out here. When it was offensive practice, he was a jokester. When it was defense, he was all business.”
Mayfield and the Bulldogs open the season with a home game against Crosby on Aug. 28.