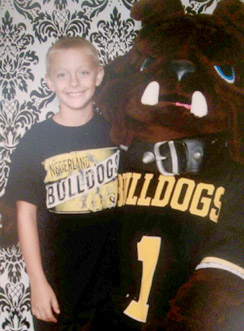 NEDERLAND — Funeral services are set for Brody Wayne Strother, 11, of Nederland who died late last week after a mysterious illness.
A visitation for family and friends will be held from 4 to 8 p.m. on Tuesday Aug. 4 at Fellowship Baptist Church in Nederland.
Funeral services will be held at 10 a.m. Wednesday, Aug. 5 at the Fellowship Baptist Church in Nederland with the Rev. Mike Parise officiating assisted by the Rev. Dean Crites under the direction of Levingston Funeral Home in Port Neches. Burial will follow at Restlawn Memorial Park in Vidor.
Strother was a healthy, active child until July 28 when he began having seizures and was flown to Texas Children’s Hospital in Houston, according to a Facebook page Prayers for Brody Bear. He was given numerous different medications and was placed in a medically induced coma as doctors searched for the cause of the illness.
Strother succumbed to the mystery illness July 31 at Texas Children’s Hospital.
Sissy Yeaman, principal at Highland Park Elementary where Strother would have entered fifth grade, said the child was well liked by all.
“He was a very loving kid, on the AB honor roll and just this year while in the fourth grade he received a science award, Super Student award as well as Character Counts award,” Yeaman said. “He was just a young boy who teachers, adults as well as kids loved to be around.”
Yeaman said staff will be available during the visitation and funeral to help students understand and begin to work through the death.
“Needless to say it’s a shock and disbelief,” she said. “Anytime you lose someone as precious, at age 11, it’s hard to begin to wrap your mind around.”
Strother’s younger brother attends Highland Park and Yeaman said staff will do as much as they can to “love on him and take care of him.”
Brody Strother was born in Beaumont on June 2, 2004 to Lonnie Strother and Stephanie Theis. He was a lifelong area resident and attended Highland Park Elementary and was excited about going to the fifth grade. He was very active in all sports, according to his obituary.
Brody is survived by his mother Stephanie Crites and husband Dean’o of Nederland and his father Lonnie Strother and wife Dee of Vidor; grandparents Donald Ross and Denise Theis of Ohio, Charlatte Whitehead of Vidor, Dean and Mary Crites of Fannett, Donald and Yvonne Strother of Vidor and Robert and Collette Bery of Vidor; brothers Bret Theis, Braxton Starnes, Tyler Crites and Austin Crites; sisters Haley Crites, Shaina Strother, Kelsey Strother and Alden Revia.
Memorial contributions may be made at Mid County Teachers Credit Union in Brody Strother’s name. Account No. 46428.
E-mail: mary.meaux@panews.com
Twitter: MaryMeauxPANews