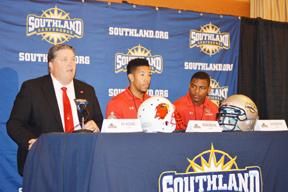 LAKE CHARLES – Coming off their best season since the return of football in 2010, the Lamar Cardinals did not receive much love in the preseason Southland Conference polls released Wednesday.
The conference held its annual media days at L’Auberge Casino Resort in Lake Charles, La. Wednesday and a third place finish in 2014 did not bring any respect the Cardinals way to start 2015.
Lamar was selected eighth in both the Coaches’ Poll and Sports Information Directors’ Poll. Sam Houston State, which won its sixth league title last year, was the top pick in both polls with eight coaches selecting the Bearkats and nine SID offices picking SHSU to win the SLC.
Lamar finished 8-4 in 2014 and finished third in the SLC. The Cardinals went 5-3 in conference and was 5-2 at Provost Umphrey Stadium and 3-2 on the road.
“We are excited to get another season going,” Lamar coach Ray Woodard said. “We are coming off a very satisfying, very gratifying season where we accomplished a lot of things we wanted to do. This team, we have more lettermen coming back than ever before and more starters coming back than ever before. What I told them is the one thing they having going for them no other team has had is they are coming off a winning season.”
Woodard did not seem to mind the low ranking.
“Obviously we have some locker room material after being picked eighth,” Woodard said. “That is great from a coaching standpoint. From a conference standpoint, I understand it.”
One of the starters back is Lamar’s all-time receptions leader, Reggie Begelton, who has hauled in 170 catches.
Begelton has led the Cardinals in receptions for the last two seasons with 82 grabs in 2013 and 67 catches in 2014. Begelton was named to the Preseason All-Southland Conference Football Team.
“The most exciting thing we have for this year is we have a lot of senior leadership on this team,” Begelton said. “We are looking forward to getting those young guys in and mold them for the future of this program.”
The Cardinals must replace Lamar’s most prolific passer in school history. Caleb Berry holds the record for most yards in a season (3,709) and career yards (7,863). Berry also holds the most passing yards in a game, 554 against Central Arkansas in 2014.
Senior Joe Minden and junior Carson Earp were the two quarterbacks named Wednesday as the players competing for the starting job.
“Both are talented players and intelligent players,” Woodard said. “Both pick things up at a high rate of speed. We have our entire receiver corp and running backs back. They have not played a down and not separated from each other. We will go into camp with both those young men battling it out for the starting position.”
Woodard, who enters his sixth season at Lamar, said the Cardinals expect to have a firm starter by the time SLC play begins on Sept. 19 with a road trip to Huntsville to face the Bearkats.
Returning to strengthen the running game is Kade Harrington who has the fifth most career rushing yards in Lamar history, 1,620. Harrington rushed for 880 yards in 2013 and 740 yards in 2014 with 19 career touchdowns. Harrington was a second-team Preseason All-Southland Conference Football Team selection.
Begelton said the Cardinals are not worried about being picked so low in the polls.
“It is nothing but polls,” Begelton said. “The season has not started yet. We have to show everyone we are ready to go again. You can’t live off the past.”
Junior defensive back Xavier Bethany, a second team preseason all-conference pick, led a defense that finished third last year in the SLC in total defense. He too was excited to prove the pollsters wrong.
“The polls are just numbers,” Bethany. “It is motivation. We have no respect right now.”
Lamar opens the season Sept. 5 at home against Bacone College before traveling to Waco to face nationally-ranked Baylor. The Cardinals then hit the road to open the SLC schedule with games against Sam Houston State and Southeaster Louisiana.