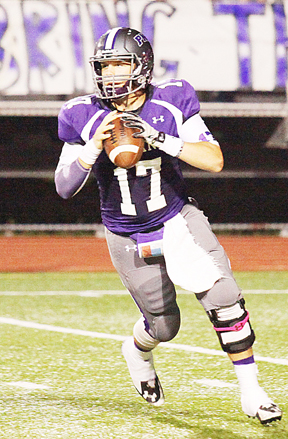 PORT NECHES — It looks like the Lamar Cardinals have their quarterback of the future and the team did not have to look far to find their guy.
Port Neches-Groves senior Adam Morse reported Monday he has committed to play for Ray Woodard and the Cardinals.
Morse is coming off one of the best seasons in PN-G history as a junior.
“This takes a lot of weight off my shoulders,” Morse said. “I get to go to a great school and play football.”
PN-G’s No. 17 threw for 2,937 yards in 2014, second most in PN-G history behind Dustin Long’s 3,087 in 1999. The difference is Long played 16 games in 1999 while Morse had his yards set in 11 games.
Morse threw for the most touchdowns in a year at PN-G (31) last year and had the most yards in a game for any Indians signal caller (383) in his first varsity start.
“I am very happy for him,” PN-G coach Brandon Faircloth said. “I know it is a school he has wanted to go to for a long time. He grew up here in Groves and I am sure when they (Lamar) brought football back he grew up wanting to play for them.
“His hard work has paid off. He is one of the top quarterbacks in the state in my opinion. For Lamar to lock him up, that is good for everyone. That is good for Port Neches-Groves. That’s for Adam Morse and it’s great for Lamar.”
One major reason Morse decided to play for Lamar is how close it is to his hometown.
“All my family will be able to come watch a majority of the games,” Morse said. “That was very important to me. Coach (Chuck) Langston told me how if I came to Lamar I could finish a game and go eat with my family. That would be awesome.”
There was already one person ready to watch Morse play on Saturdays at Provost Umphrey Stadium.
“The Faircloths will be there I can assure you of that,” Faircloth said. “We already go watch Jayce (Nelson) play. Adam is going to be a great player for Lamar for a long time. I am sure he will set a bunch of records over there at Lamar. We are excited for him.”

PRUETT COLUMN: Before making a statement, check the facts