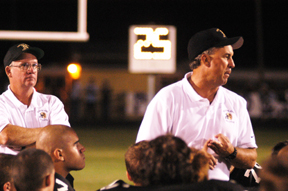 It is hard not to start a Nederland Bulldogs historical piece without mentioning first the current coach, Larry Neumann.
Neumann is entering his 23rd season with the Bulldogs and sits on 174 career wins.
He started back in 1993, before any of the current Nederland players were born.
The Bulldogs shared the district title last season and won the previous three outright.
Nederland has been to the playoffs in 19 seasons under Neumann.
The Bulldogs has a program have a 533-364-35 overall record and are 44-31-3 in the playoffs.
Football started in Nederland under coach C.O. Wilson in 1925.
The first Bulldogs game did not go too good for Nederland. Orange defeated Nederland, 127-0.
Nederland’s first win, though, is extra special to Bulldogs fans as it was a 6-0 defeat against Port Neches.
The first great coach in Nederland history was I.B. Griffith who led the Bulldogs from 1936 to 1944. The Bulldogs won four district championships under Griffith who was 64-15-5 in his career.
Before Bum Phillips coached at rival Port Neches-Groves, Phillips was the head coach at Nederland.
He led the program from 1951 to 1956. Nederland won four straight district championships in his last four seasons. Phillips career record with the Bulldogs was 53-16-3 and in his final four seasons Nederland went 10-2-1, 12-0-1, 11-1-1 and 13-1.
Emmett McKenzie took over for Phillips in 1957 and the team had its greatest season.
The Bulldogs outscored opponents 431-54 and went 14-0 on the year. The season was capped with a 20-7 victory over Sweetwater in the 3A championship game.
Nederland went 10-1 in 1959 and did not reach double digit wins again until 1997 when Neumann led the Bulldogs to a 10-2 record.
The 1997 team was eliminated from the playoffs in the area round by Jacksonville, 21-14.
One of Nederland and Neumann’s biggests accomplishments was winning 29 straight district games from 2010 to 2014. Goose Creek Memorial ended the run last year with a 57-56 double overtime win at Bulldogs Stadium.
Nederland can also boast for winning five straight games against PN-G. Last year’s 35-28 win over the Indians sent the Bum Phillips Bowl Trophy to Nederland High School. It was the first year for the hardware to be handed out to the winner of the game between the rivals who have played 90 times.

Former Nederland quarterback Kevin Barbay has seen the ups and downs of football. The downs are obvious in Barbay’s case.... read more