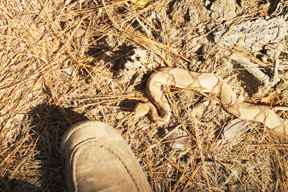 Chester Moore Jr./Port Arthur News Watch where you’re walking. Most snakebites occur when people put their feet and hands in areas without looking. Although highly camouflaged even snakes like this copperhead can be spotted if you look closely.

By Chester Moore Jr.
The News Outdoors Columnist
The alligator attack in Orange has spawned dozens of questions and interesting conversation about the various creatures that dwell the waters, wood and wetlands of Southeast Texas.
The truth is our region is host to many wild things that could potentially cause harm but that rarely does so.
Education is the first step in staying safe in the outdoors and this week I thought a great way to sort of wrap up the recent concern due to the gator attack is going over steps for avoiding local biters.
Alligators: They start with an “A” so why not start with them. As we mentioned in last weekend’s column, the key to avoiding problems with alligators is not feeding them. Fed gators equals gators attracted to humans.
In addition, if you come upon an alligator nest, get away quickly. The females can be very protective. Otherwise, stay out of the water in areas where they are seen and certainly where there are signs warning of their presence.
Copperheads: These beautiful serpents produce more bites than any other snake in Texas due to their abundance, camouflage and ability to thrive in suburban areas.
The most important thing to keep in mind with these snakes is to be very careful when picking up leaves, sitting at the base of a tree when squirrel hunting or picking up any kind of wood. They like all of those areas and with their ability to blend in, they can be challenging to see.
Coral Snakes: Red and yellow, kill a fellow. These brightly-marked snakes rarely bite anyone and are infrequently seen but their bite does pack a punch.
Most coral snake bites come from people picking them up so that should be easy to avoid. Make sure and tell kids to never pick up any snake without adult supervision.
Like copperheads, they like to burrow under rotting wood so be cautious when picking those kinds of things up.
By the way, these are not rear-fanged snakes as many believe. They have front fangs, albeit small ones and they can bite without having to “chew” on you.
Cottonmouths: The cottonmouth is the most feared snake in Southeast Texas although bites are rare. The key thing to avoid is getting in duck blinds early in the morning (especially in teal season) without checking if one has crawled in for comfort and not watching where you walk. This is especially true in the woods where there are more cottonmouths than any other area.
Small puddles tend to be havens for these snakes, so pay special attention as you walk along.
Coyotes: I put these on the list because there is increasing coyote aggression in Texas. We have documented this on these pages since 2005 when we learned of a group of coyotes surrounding a local hunter on a turkey hunt in South Texas.
Coyotes are getting bolder for much the same reason as alligators. People are feeding them. Most of it is unintentional as disposed waste and dog food left outside is easy pickings for the crafty canines.
Make sure and feed your dogs inside if you live anywhere near woods, marsh or a field, even if it is in the city. Coyotes can live just about anywhere.
Feral Dogs: Maybe the most dangerous animal we have in our area is the feral dog.
On two occasions (once in Jasper Co, once in Newton Co.) I have had bad run-ins with feral dogs.
If you enter the woods it is a good idea to have some sort of weapon with you (even a big walking stick will help) and avoid going alone. If you see a pack of dogs or even single dogs in the woods, back away slowly and leave them be. Dogs have no fear of humans and when they get into a feral state they can be quite dangerous.
Rattlesnakes: Believe it or not, there are three rattlesnake species found in our area. The timber (canebrake) is located to the north in the Pineywoods, while the pigmy can be found in scattered pockets south of Interstate 10 and again further north.
As we have documented on several occasions, the western diamondback is showing up now as well with specimens verified in Winnie and Sabine Pass.
The chances of encountering a rattler here is rare. The main thing to keep in mind is to be very careful when walking over deadfall in the woods and to be mindful when walking in the woods at night. Rattlers do most of their moving about after hours.
Sharks: Probably the number one way to avoid shark attack in local waters is to have a long stringer if you are wadefishing and keep it away from your body.
Many anglers talk about having sharks hit their stringer and a few have reported brushes with big bull sharks in the “pocket” area of the Louisiana side of the jetties, in the surf and even on the north end of Sabine Lake.
Additionally, women on their menstrual cycle should avoid going into the water as should anyone with cuts.
If you’re at the beach and a large school of baitfish comes by, get out of the water. The shark seeking to eat a bunch of pogies might tank a hunk out of you.
The truth is there is no reason to enter the woods or waters scared but you must have a realistic look at what is out there. The great outdoors is to be enjoyed and if you keep these tips in mind your Southeast Texas outdoors experience can most likely be a safe one, devoid of teeth marks.
(To contact Chester Moore, e-mail him at chester@kingdomzoo.com. You can hear him on “Moore Outdoors” Fridays from 6-7 p.m. on Newstalk AM 560 KLVI or online at www.klvi.com.)

For the first time in team history, the Port Neches-Groves Softball 12U has went undefeated in District 39 and are... read more