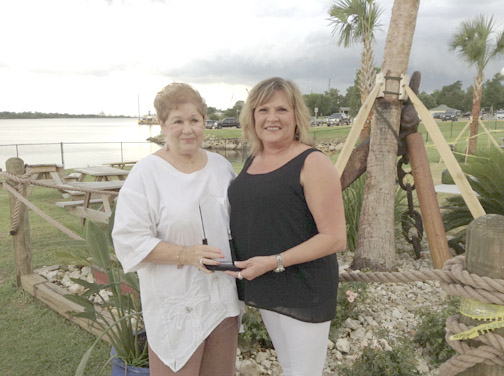 Linda Foster, left, was named the Sertoman of the Year by the Gulf Coast Area Sertoma Club recently. The award was presented by club president Dana Griffin, right.

The Gulf Coast Area Sertoma Club recently awarded Linda Foster with the Sertoman of the Year Award.
The award was presented at the annual President’s Dinner held at the Wheelhouse Restaurant in Port Neches. President Dana Griffin presented the award to Foster. She received the award for her outstanding dedication to the mission of the Sertoma Club, “Service to Mankind,” and her enthusiastic commitment and participation in all club activities.  Foster has been a charter member of Gulf Coast Sertoma since 1991 and has served as club president.
This is her second time to receive the award for her outstanding commitment to the club.  Foster also serves on the Board of Directors of the Capland Center for Speech Therapy. She and her husband, Gary, reside in Port Neches.