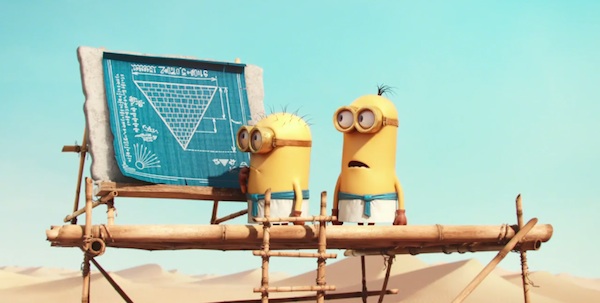 I enjoyed both “Despicable Me” movies, and laughed frequently at the antics of the minion army of bright-yellow, gibberish-speaking, pill-shaped assistants. In many ways, the minions stole the show, so it’s no surprise that they would get a chance to shine in their very own movie, aptly titled “Minions,” which opens this week in theaters.
They aren’t quite up to the task of truly shining, but especially for the tiny tots in the audience, “Minions” provides plenty of silly antics and giggle-inducing physical humor. Families with lots of younger children should love the comic mayhem, although mom and dad may miss the attention to story and emotional growth found in the first two “Despicable Me” movies.
This prequel opens with a biology lesson of sorts, as we see how the minions evolved from the primordial soup and signed on as happy helpers for many of the world’s biggest villains, which they promptly destroyed thanks to their ineptitude. Who knew that Tyrannosaurus Rex, Dracula and even Napoleon were doomed because they were being served by these bumbling minions?
It’s a cute opening, stuffed with sight gags and rapid-fire pratfalls. The main story picks up in 1968, BG (Before Gru) where a plucky trio of minions head to a super villain convention where they meet Scarlett Overkill (voiced by Sandra Bullock). These three minions, Kevin, Bob and Stuart (all voiced by Pierre Coffin) agree to serve Overkill in her quest for world dominance. True to form, this trio of idiot/heroes quickly proves that they are more trouble than they are worth.
Except that the minions are certainly adorable, and they always mean well, even when they destroy everything they touch. It’s hard to dislike these creatures, even though they become a bit tiresome when they have to support an entire movie. With the minions, a little of their giddy mayhem goes a long way.
The film also suffers from Sandra Bullock’s performance as the minion’s supervillain. It is such a one-note character that it makes you anxious for the minions to move on and meet Gru in the “Despicable Me” movies. It’s easy to forget that while the minions may have stolen the show in these movies, Gru (Steve Carell) still carried the film’s heart. Without a central character to cheer on, “Minions” becomes little more than an amusing, but ultimately unsatisfying trek through a series of comic set pieces.
Sure, these minions are “bananas,” but that’s not the same as being a truly satisfying family film for anybody more demanding than the youngest of children.
Movie reviews by Sean, “The Movie Guy,” are published bi-weekly in “The Port Arthur News” and seen weekly on KFDM and KBTV. Sean welcomes your comments via email at smcbride@sbgtv.com.com.

HEALTHY LIVING Jody Holton Did you know the human body is more than 60 percent water. Blood is 92 percent... read more