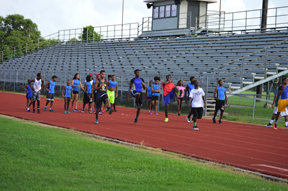 By Gabriel Pruett
The News Sports Writer
Track season in Port Arthur does not stop just because school lets out in the district.
The Port Arthur Flyers Track Club sends 38 participants to the Region 12 meet today in Abilene. A trip to nationals awaits the top five competitors in each event.
Each summer young men and women keep the television sets and cell phones out of arms’ reach and hit the Port Arthur Auxilliary Track to train for this exact moment.
Alexia Lewis, 9, has been competing for the Flyers Club for three years in the long jump. She has the second best jump in the region.
“Long jump was the right thing to do for me,” Lewis said. “I want to own it. I want to win it to take it. I have been working very hard and growing every day. I am excited a lot of my friends are going with me this year.”
Lewis’ time spent with the team even led her to meet one of track’s biggest names, Jackie Joyner-Kersee. Lewis even got an autograph from the six-time Olympic medalist.
Flyers Club coach Gerald Armstrong said one of the bright spots for the team is how he has seen the work in the summer paying off for athletes in middle and high school.
“What made me proud is when I was at a middle school meet and the coach thanked me for our work,” Armstrong said. “He said the kids who participated with the Flyers Club eventually help coach in middle school because they know what to do and what to expect. That makes a big difference.
“Then coaches (Darrell) Granger and (Kenny) Harrison at the high school support these teams 100-percent.”
Armstrong has lofty goals for what to expect out of his team at regionals.
“We want to have a very big Wednesday,” Armstrong said. “Our kids have really developed. We sent 18 to Nationals last year and we could have a good 32 make it this year.”
Capri Wilson has been to regionals for five straight years and has yet to medal at nationals.
“I have a little revenge in mind at nationals,” Wilson said. “Track is hard. You have to push yourself no matter what anyone else says.
“I wish more kids were out here and didn’t sit down and be lazy over the summer. I am doing this because I want a scholarship after high school. I have to get up and work for it.”
Chris Williams is a two-time national champion in the 100-meter dash. He will compete in the 100, 200 and 4×100 team that ranks first in the nation.
“I’m trying to retain my gold from last year,” Williams said. “This year I got my team with me. We are trying to bring a lot of medals home to Port Arthur.”

By Gabriel Pruett The News Sports Writer PORT NECHES — The 12-year-old All Stars from Port Neches put on a... read more