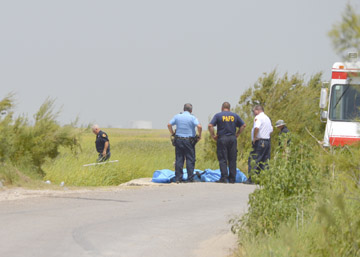 SABINE PASS — Emergency workers are searching for a second victim in a drowning incident that claimed the life of a Beaumont man Tuesday morning.
The deceased, a black man appearing to be middle-aged, was pulled from the Texas Bayou, near the jetties, after a father and son who were kayaking saw a body floating in the water at about 10 a.m. and called 9-1-1, Troy Broussard, Port Arthur fire captain, said.
The deceased’s name at press time had not yet been released pending notification of next of kin.
Emergency workers at the scene said the deceased’s body was found in the water with a fishing rod in still his hand.
Emergency responders are investigating the possibility that there could be second drowning victim, possibly the man’s son, and have ordered a more extensive search for Tuesday afternoon.
Port Arthur Police Sgt. Scott Gaspard said state workers would be conducting an aerial search for what police believe is the second victim.
“All indications are that the gentleman was fishing with his son. The son is still missing and we believe he is in the water as well,” Gaspard said.
Fishing rods were found near an empty truck discovered near the body, as well as food items indicating more than one person.
At the water’s edge, near the truck, police found an amount of cash, a driver’s license and other items believed to have been taken from the pocket of either the deceased, or his son.
Port Arthur police were still investigating the drowning at press time Tuesday.
At this time, foul play is not indicated.
E-mail: sherry.koonce@panews.com
Twitter: skooncePANews 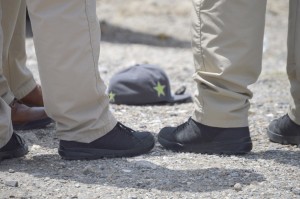 First responders stand near a baseball cap likely belonging to a man who drowned in Texas Bayou in Sabine Pass on Tuesday.

ORANGE — An investigation is under way into what caused the death of a Beaumont man in a tank car... read more