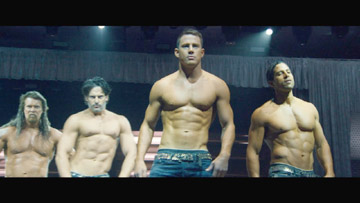 “Magic Mike XXL” is an infectiously enjoyable sequel. It isn’t as good as the original film, but it still features a non-stop parade of impossibly perfect beefcake, so it should play very well as a girl’s night out movie for the rest of the summer.
We catch up with Mike (Channing Tatum) three years after the last film. He’s no longer working as an erotic dancer, having started a custom-made furniture business, which allows him the opportunity for a delightfully cheesy “Flashdance” inspired moment where Mike jams to some old school R&B while sparks literally fly out of his grinder.
The story proper reunites most of the original dancers as they are preparing to go to a Myrtle Beach convention where 3,000 screaming women await the best male entertainers (don’t call them strippers) in America. The guys are hoping to get one last big payday out of the trip. Mike agrees to put his struggling business on hold and tag along.
“Magic Mike XXL” turns into a road movie where each of the guys gets to talk about their dreams for the future and deal with some minor adventures along the way. None of this is remotely believable. These guys are simply female fantasies made flesh. They are impossibly well built, they talk repeatedly about how important it is to listen to women and are so kind-hearted and gentle that I’m surprised that the guys didn’t stop to braid each other’s hair during the trip.
Grown up female audiences should enjoy the film, despite the unbelievable characters, provided that they are OK with some very R-rated dance sequences. Most of these dances are simulated sex acts choreographed to a piece of pop music. I think that the original film had better dance routines, although there are still plenty of moments where Channing Tatum gets to prove that he’s a very talented dancer.
The other misstep, for me, is the loss of Matthew McConaughey in the sequel. He gave the first film its spark and he is sorely missed this time around, although Joe Manganiello comes close to filling the void with his beefed up role. His convenience store seduction scene is one of the more enjoyable moments I’ve seen in movies all year.
The bottom line is that “Magic Mike XXL” is very enjoyable, in a very guilty pleasure manner of speaking. There isn’t any real drama here, but the film isn’t designed to court anything other than audiences who are looking to stare at a handful of hot guys, gyrating sexily to a hot beat.
In that respect, “Magic Mike XXL” certainly delivers.
Movie reviews by Sean, “The Movie Guy,” are published bi-weekly in “The Port Arthur News” and seen weekly on KFDM and KBTV. Sean welcomes your comments via email at smcbride@sbgtv.com.com.