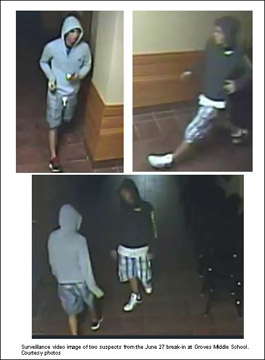 GROVES — The City of Groves is offering a $1,000 reward for information leading to the arrest of the individuals who broke into Groves Middle School and caused approximately $2,000 in damages.
Groves Police Department released surveillance video on their Facebook page showing two males wearing shorts and hoodies inside the school on Saturday, June 27.
Groves City Marshal Norman Reynolds said the suspects broke into the school and set off several fire extinguishers, emptying them, inside a locker room area. They also used one of the extinguishers to beat on a door to gain entrance to a coach’s office.
“There’s possibly $2,000 worth of damage,” Reynolds said. “The cleanup is a big part of that (cost).”
Reynolds said another portion of the damage estimate is to replace the door.
If you have any information, please call the Groves Police Department at 409-960-5743 or send a personal message to the Groves Police Department’s Facebook page.