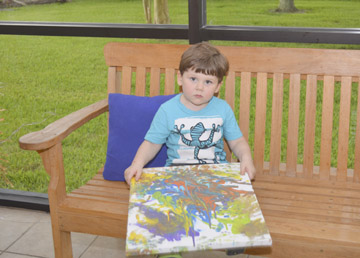 Jude Searl, 2 1/2, shows his first masterpiece on canvas while seated the Texas Artist Museum. Searl was diagnosed with autism and is non-verbal with the exception of a few words he has learned through therapy. Prints of his abstract art are for sale with proceeds going towards his therapy.

When autism shut a door in Jude Searl’s young life, another door was opened.
Jude went from knowing about seven words at age one to shutting down verbally and emotionally just months later.
“It was heartbreaking,” Jude’s granny, Ann Cutshall of Port Neches, said while seated at Texas Artist Museum recently. “He quit looking at us, didn’t make eye contact. He didn’t want people to hold or touch him. I wasn’t going to take that. I put him in my lap and held him.”
Then a door was opened that moved the child, age 2 1/2, into a world where he can express himself in his own way through the use of paints and canvas.
Cutshall, an artist herself, discovered the key that opened the lines of communication with her grandson when she placed a canvas and paints in front of him.
“That afternoon he painted four canvases in a four-hour period,” Cutshall said. Later he would stamp his hand print on the back of the painting and Cutshall would add his name, age and date.
Since then he has created 26 paintings.
“He always chooses purple first,” she said while holding a muffin tin stained with the various colors that Jude uses. “This is his actual paint tin. There are four shades of purple.”
His masterpieces were recently on display at Texas Artist Museum making him one of the youngest people in the world to have artwork shown in a museum. His work can also be seen, and purchased via www.facebook.com/JudeandGrannyGallery — a place for Jude’s abstract art and Cutshall’s oil or pencil portraits.
Autism, a complex disorder of the brain, is characterized by range of difficulties in social interaction, verbal and non-verbal communication and repetitive behaviors. Jude was initially diagnosed as severely autistic at Texas Children’s Hospital based on him being non-verbal, she said. Jude attends the Shorkey Center for applied behavioral analysis which helps with social skills.
“In just the first four weeks he can say mama, dada and has said the word puzzle and he knows some sign language,” she said. As she spoke Jude wandered around the museum and occasionally stopped by his granny and made muffled sounds as if he were trying to speak a sentence but the words weren’t there yet.
One day recently Cutshall was sitting around looking at Jude’s work while thinking of Jude’s $50 per hour cost of therapy and realized she could possibly make the money by selling some of his prints with a portion of the money going towards the center. With prints in hand she went to a local Mexican restaurant for a girls night out and was soon flanked by patrons wanting to make a purchase. That night she sold 14.
While Cutshall doesn’t know where Jude finds his inspiration for his work she can guess. She pointed to two bluish tinged works of art on a nearby wall.
“I read him a story about a dolphin family and underwater life. I must have read it four or five times and got tired of it,” she said. “So I told him what don’t you go out and pain granny a picture. When you look at them you can see the shape of a dolphin.”
Everyone sees something different when looking at Jude’s abstract art and Cutshall has had lots of response from the website. One woman, she said, will circle things she sees in the art and sends it back to her. In some, Cutshall said, there are obvious angels.
“I asked God to give him his voice,” she said. “Then one day as I drove into my driveway I stopped. God did give him his voice on these canvases.”
E-mail: mary.meaux@panews.com
Twitter: MaryMeauxPANews

Mid- and South County residents are brushing up on their patriotic tunes and readying festive outfits for Independence Day celebrations... read more