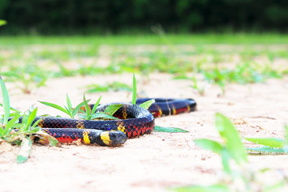 By Chester Moore, Jr.
“Red and yellow kill a fellow. Red and black venom lack.”
That is the poem I learned how to tell the difference between coral snakes and nonvenomous milk snakes.
This snake is on the “kill a fellow” side and it is a Texas coral snake photographed by seventh grader Rachel Rose as part of a Kingdom Zoo wildlife photography program.
Coral snakes are also present and although rarely seem themselves deserve their reputation for being potentially dangerous. Although they certainly will not come out of their way to attack you, picking one up could result in serious problems.
The coral snake has neurotoxic venom attacks the nervous system similar to that of a cobra. The Louisiana milk snake which has the “red and black, venom lack” pattern is also best left alone because if you have to rely on poetry to tell the difference in snakes, trouble cannot be far away.
(To submit photos to the Critter Cam project, e-mail them to chester@kingdomzoo.com Put “Critter Cam” in the subject line.)