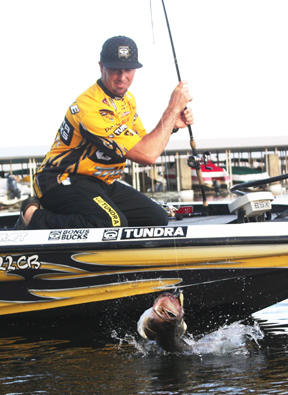 Chester Moore Jr./The News Catch and release has allowed bass fisheries to thrive throughout the country.

Catch and release of bass and specks examined

By Chester Moore Jr.
The News Outdoors Editor
The two most popular species for local anglers are largemouth bass and speckled trout. Both of these species are thriving now in large part to catch-and-release practices but not everyone has the right information to do the best job of releasing these species.
The following is information from the Texas Parks & Wildlife Department on proper bass release.
1. Avoid catch-and-release angling in water deeper than 30 feet.
2. Avoid catch-and-release angling in hot weather. Catch and release is stressful to black basses at water temperatures above 70°F, and very stressful above 80°F.
3. Avoid capturing fish from spawning beds.
4. Use clean, sharp hooks.
5. Use barbless hooks when possible.
6. Use rods, reels and lines that are heavy enough to land your target fish without excessive play.
7. Keep fish in water as much as possible. A good rule of thumb is not to keep it out longer than you can hold your breath.
8. Weigh fish as soon as possible after capture.
9. Grasp black bass by the lower jaw. Do not hyper-extend the jaw.
10. Never pick up a fish by placing fingers under the gill cover or in the eye sockets.
11. Remove hooks quickly, with as little tissue damage as possible.
12. Wet hands before touching the fish. Dry hands remove protective slime from fishes, which leads to increased risk of infection and disease. Hands should be bare or in smooth rubber gloves. Wet cloth gloves may provide a better grip, but may remove additional slime and transfer disease organisms from one fish to another.
13. If fish must be removed from the water, place them on cool, wet, smooth surfaces. No hot surfaces like engine covers or sun-drenched boat decks. Carpeted decks may be abrasive, even when wet. Place fish on a wet piece of plastic or soft towel, if necessary for hook removal.
14. Measuring boards should be as smooth as possible. Wet board before laying fish down.
The catch and strategies for speckled trout are essentially the same as those for largemouth bass, with one major difference. Trout are more delicate so special attention should be paid to several key points.
1. When fishing for trophy trout remove barbs from hooks, especially when using lures with treble hooks.
2. Hold trout out of the water only long enough to snap a quick photo. It is essential to keep the fish in the water as long as possible.
3. Avoid playing trout for long periods of time during the peak of summer. Light line may be fun to use but it can lead to epic fights, which can lead to dead trout.
4. Use specialized prizes or a Boca grip style device to “lip” the fish and avoid lifting it quickly from the water.
According to the journal of North American Fisheries Management, scientists investigated the mortality associated with catch and release in the fishery for spotted seatrout trout in south Texas.
“Specifically, this study investigated the mortality for hook-and-line-captured spotted seatrout as a function of bait type, hook type, angler skill level, and fish size. Using a variety of angling techniques, we captured 448 spotted seatrout…and assessed mortality in replicate field enclosures.”
“The overall short-term mortality for all treatments was relatively low. The exception was angler skill level. Angling by novices produced a significantly higher mortality rate than angling by skilled anglers; however, mortality averaged only 18 percent even for inexperienced anglers. To evaluate long-term mortality, we monitored 27 spotted seatrout held in a laboratory facility for 30 days. We observed 11 percent mortality during the first 48 hours and no mortality during the subsequent 28 days.”
“The location of hook-related injuries may be the most important factor in determining catch-and-release mortality. Anatomical hooking location was not a factor in the analyses but was treated as a component of experimental treatment level; however, we observed that mortality was typically associated with hooking location rather than angling method or bait type.”
This study determined that catch-and-release is an extremely important part of managing speckled trout populations and anyone employing these methods is doing something positive for the fishery.
(To contact Chester Moore, e-mail him at chester@kingdomzoo.com. You can hear him on the radios Fridays from 6-7 p.m. on Newstalk AM 560 KLVI or online at www.klvi.com.)

By Chester Moore, Jr. “Red and yellow kill a fellow. Red and black venom lack.” That is the poem I... read more