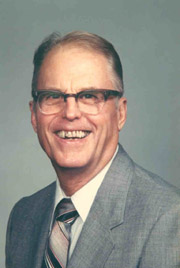 Oscar M. Travis, 95, of Port Arthur passed away on Saturday, June 27, 2015 at Christus St. Mary Hospital in Port Arthur.
He was born in Magnolia, Mississippi on January 6, 1920 to Maude Brabham Travis and Joseph John (J. J.) Travis. Oscar has been a resident of the Port Arthur area since 1925. He served in the United States Army during World War 11 for five years. He retired from Gulf Oil in 1978 as an operator after 39 years of service. Oscar was affiliated with the OCAW Local 4-23 and Central Baptist Church in Port Arthur, where he was active in the Baptist Brotherhood, served as chairman of the Blood Drive for the church and helped with the maintenance of the church during his younger days.
He was preceded in death by his parents, his brothers, Robert and Hansford Travis and his daughter, Carol Lynne Stefflen.
He is survived by his loving wife of 73 years, Frances Travis of Port Arthur, his son, John Allen Travis of Austin, Texas, his two grandchildren, Michelle Carter and her husband, Adam of Port Neches, Michael Stefflen of Houston, Texas, two great grandchildren, Julia and Jesse Carter.
Visitation will be on Wednesday, July 1, 2015 from 1:00 PM till service time at Clayton Thompson Funeral Home in Groves. Funeral service will be at 2:00 PM Wednesday with Dr. Phil Sigman, officiating at Clayton Thompson. Interment with full Military Honors will follow in Greenlawn Memorial Park.