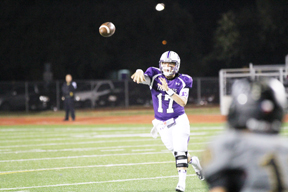 Indians selected to win 22-5A by annual magazine

By Gabriel Pruett
The News Sports Writer
PORT NECHES — There has been a revival of offense around the state of Texas in high school football.
Take a look at the scores from several of the state championship games held in 2014 and it becomes obvious defenses have some catching up to do.
Allen scored 47 in the Class D1 championship; Aledo defeated Temple 49-45 in the Class 5A DI game while Ennis won the DII title 38-35; Navasota downed Argyle 42-35 in the Class 4A DI championship and Gilmer put up 35 against the defensive minded West Orange-Stark in a 10-point win over the Mustangs in the DII matchup.
If offense wins championships these days, it is no wonder Dave Campbell’s Texas Football has picked Port Neches-Groves to win the District 22-5A title.
PN-G went 7-4 last season behind an offense guided by quarterback Adam Morse. The Indians finished 5-2 in league play with losses to Nederland and Beaumont Central, the two teams that tied for the district championship.
“That shows the people putting out the magazine have confidence in our team,” Morse said. “I believe we have the ability to pull out first place this season. Everybody has talked about this year since we were little and I think we are prepared for it.”
Morse threw for 2,988 yards last year, the second most in PN-G history. He was 216 for 330 passing with 31 touchdowns. His touchdown mark is a new school record, surpassing Brennan Doty’s 29 touchdown passes in 2010.
PN-G averaged 464.9 yards per game in 2014 and scored an average of 40.6 points a contest. The Indians scored over 50 points in three games last year, with the highest being in a 56-7 win over Baytown Lee.
Morse is back and he does have to find a way to work around losing the Indians top rusher and receiver from the previous season. Running back Brant Halfin ran for 1,337 yards and 17 touchdowns and receiver Kaleb Sparks hauled in 74 receptions for 1,221 yards and 15 scores in 2014.
PN-G does return junior Jace Runnels who ran for 236 yards on 40 carries and senior Kody Cropper who put up 139 yards on 22 totes.
At the receiver position, Caisen Sullivan returns after having 52 catches for 617 yards and five scores while Keynel McZeal had 32 receptions for 402 yards and five trips to the endzone.
“Keyneal has really settled down this year,” Morse said. “Last year as a sophomore I think he was nervous. PN-G football carries such a big spotlight. Now he catches everything thrown his way, after having some drops last year.
“Caisen Sullivan has great hands. You won’t see too many drops when the ball is thrown his way. It is almost overwhelming the weapons we have this year.”
The Indians also welcome back Jack Giblin who was injured before the start of district play in 2014. He had 17 catches for 312 yards and three touchdowns.
“It has been great seeing Jack back on the field,” Morse said. “I get to throw it up there and watch him man-handle people to get the ball. He is going to be the biggest difference maker.”
So the fire power is there for Morse. with seven returning starters on offense.
“If two-a-days started tomorrow, I would be all over it,” Morse said. “I already have an alarm clock set.”
PN-G’s defense returns six starters, including linebacker Trey Rembert who posted 136 tackles as a junior in 2014 and is in his fourth year starting for PN-G.
The Indians allowed 356.3 yards and 23.7 points a game last season.