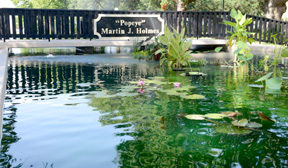 Renovations to a water feature at "Popeye" Holmes Park in downtown Port Arthur are complete. The bog will be showcased Wednesday during the Lunch in the Park event.

‘Bog’ at Popeye Holmes Park now living up to expectations

Six weeks after Precinct 3 County Commissioner complained that a renovated water feature at the Jefferson County Subcourthouse in Port Arthur was not what he had envisioned, the water pond with a natural filtering system is ready to show off.
“I love it. The guys did a lot of work. This is what I was looking for,” Sinegal said.
Filled with plants and fish donated by Port Arthur’s Buu Mon Temple, the pond, or bog, has already attracted many to downtown Port Arthur to take photos in front of the scenic area, Sinegal said.
And, he hopes many more will come Wednesday, July 1, to not only see the bog, but also for Lunch in the Park.
The event is designed to get people out and to socialize in the city’s downtown at “Popeye” Holmes Park.
Located on the Subcourthouse grounds facing Fourth Street, Lunch in the Park is from 11 a.m. until 1 p.m. and features musical performances from J.A.G. as well as a special appearance by Port Arthur’s own Zoe-Fashion Plate.
Lunch will be available for purchase from local food establishments.
“This is a good time to showcase the bog,” Sinegal said.
While he’s proud of the outcome, Sinegal little more than a month ago was not.
In January he had announced plans to renovate the water feature for a cost of $75,000.
The restoration project was originally funded jointly by Port Arthur’s Economic Development Corporation and the county. The EDC contributed the bulk of the expenditure with about $60,000 dedicated from funding earmarked for parks projects. Jefferson County paid for the cost of the architectural firm, Beaumont’s LaBiche Architectural Group.
Sinegal said another $2,500 was spent, along with the plant and fish donations from the Temple, to create a fixture worth making the trip downtown to see.
“I am totally satisfied. This is what I had in mind,” Sinegal said. “It’s beautiful down here now with the new EDC building, the Flag Display, and now the bog.”
E-mail: sherry.koonce@panews.com
Twitter: skooncePANews

Port Arthur is proceeding with plans to renovate Peoples Park on Procter Street, turning it into a statement piece in... read more