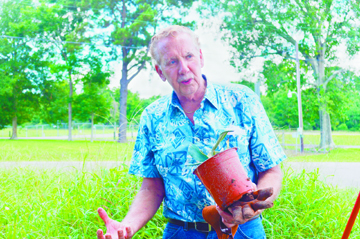 Art Williams, 72, has spent the last 30 years raising animals and growing a vast garden at his home on Atlantic Road in Port Arthur. Williams now has an extensive agave, or century plant, garden around his house. Williams says the plant is unique in that it grows for 25 years, blooms and then dies, leaving hundreds of babies behind.

After two decades of watching his agave plant growing strong, Art Williams of Port Arthur knows he will watch his plant sacrifice itself so its babies can live.

The agave, or century plant, used to make tequila, grows for 25 years, up to 20 feet in diameter, before it blossoms by growing a large mast in its center.  This mast, which typically grows anywhere from 6 to 12 inches a day, can grow up to 40 feet tall.  After spawning 40-50 baby plants, the mother agave, having used up all its energy, dies while the new plants grow around her.

Williams, 72, is harvesting the baby agave plants at his home and giving them away. Williams, who has lived in Port Arthur for 30 years, said that years ago he had been driving home from work in Beaumont when he saw a dying agave surrounded by new babies. He took one and planted it at his home, and finally got to witness it blossom many years later.

“I had heard that they died when they blossomed, but I thought it was just an old wives’ tale,” Williams said in regard to his first agave.

“Then I got to see it for myself, and they really do die for their babies.”  Unfortunately, a passing storm blew down the plant’s mast. Williams decided that when the time came again, he wanted to share the experience with everyone, which led to him giving away the new plants. Williams now has at least 60 grown agaves all over his property.

Williams put out a sign in front of his yard that advertises the free plants and briefly told their story. So far, 113 plants have gone to new homes.

Despite the fact that agave is not a type of cactus, they can still poke straight to the bone.

“I used to have a $100 drone, and I was flying it around one day when it fell into one of the agave plants. My wife and I looked for hours and could never find it — it’s part of the plant now.”

Williams, who also takes care of Italian cypruses and Confederate roses, said the agaves require little care. With the baby plants, it’s best to leave them in the pot they came in and water them every day for a month, making sure to keep the soil wet; this allows them to develop their own roots.

After a month of constant watering, the plant can be taken out of the pot and planted somewhere with plenty of sunshine. The plant will no longer require constant watering, though it won’t hurt to give it a drink every so often, and will continue to grow for many years. In order to get a beautiful, symmetrical agave, it’s best to keep it trimmed.

“It’s the kind of plant you want to put in the center of your garden,” Williams said.

Although the plants are beautiful and require little care, Williams recommends that people come and take one of the plants for the story.

“This tremendous, gigantic mast shoots up, blossoms, and then dies, leaving behind all these babies,” Williams said. “It’s the kind of plant that can be passed on for generations.  It grows for 25 years, dies, and the new plants can be passed on to the next generation, on and on.  It truly is a beautiful story.”

Father Dan prepares to retire after two decades of priesthood

By Russ DeVillier Special to The News He was baptized Robert Daly Malain.  Family and friends called him Bobby. Upon... read more