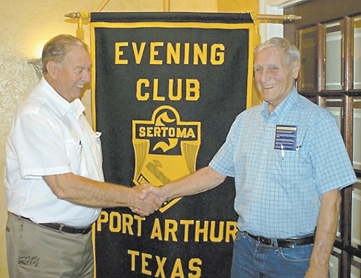 George Hyde, left, president of the Port Arthur Evening Sertoma Club, congratulates Ken Burk for being presented the Sertoma of the Year Award.

Ken Burke, a former director and vice-president of the club, received the Sertoman of the Year Award at a recent meeting of the Port Arthur Evening Sertoma Club.

President George Hyde presented the award to Ken,  who has also served as chairman of the Membership Committee.

Burke volunteers as an education counselor at Community Care Prayer Outreach Center in Nederland, helping people in need obtain their GED certificate, and also volunteers as a counselor at the United Board of Missions in Port Arthur.  He is very active in church activities at the United Methodist Temple in Port Arthur, where he is a lay speaker, singer in the Chancel Choir, and Past President of the Men’s Group.  He serves as the church Missions Coordinator for volunteer mission teams that come to our local area to help displaced persons after emergencies or storms.

Burke helps to support three prison ministries, Kairos, Welcome Back, and Operation Rebound.  Kairos is a program to counsel inmates at the Stiles Unit, a maximum security prison in Beaumont.  Welcome Back is a program that assists men leaving prison, by furnishing information regarding jobs, housing, clothing, and food while trying to provide them with church homes.  It is held monthly at the Gist Prison Unit in Beaumont. Operation Rebound is a Bible-based fellowship for prisoners held weekly in the Gist Prison Unit.  The prisoners volunteer to attend.

Burke has aided in recruiting five new PAES members and has worked a several fundraising projects.  He is the leader of a blue-grass gospel band which entertains various community organizations, including nursing homes and churches.  Before joining PAES in 2012, he was honored as a non-Sertoman and awarded The Service to Mankind Award in 2011.  He is a long-time member of the Port Arthur Rotary Club and has held several offices.

Burke and Bonnie, his wife of 29 years, live in Nederland.