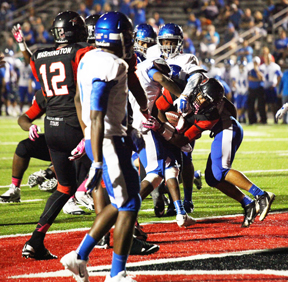 By Gabriel Pruett
The News Sports Writer
Dave Campbell’s Texas Football magazine came out late last week and for the first time in his six years as head coach, Kenny Harrison’s Port Arthur Memorial Titans are not expected to make the postseason.
Campbell’s staff predict the Titans to finish sixth in the seven-team district, one spot ahead of Baytown Sterling.
The four playoff teams out of District 21-6A predicted by Texas Football are North Shore, La Porte, Deer Park and Channelview.
Beaumont West Brook is thought to finish fifth.
The Titans return five starters on both offense and defense in 2015. Memorial is coming off a 3-7 campaign and finished 1-5 in district play a year ago.
“The rankings are defintely a motivation,” Harrison said. “It is the first time in my six years here we were not picked to make the playoffs. It is not surprising though after the year we had last year and playing in such a competitive district.”
Memorial does return one of the state’s most explosive offensive players in running back Kameron Martin. Martin has verbally committed to Baylor and rushed for 903 yards and 17 touchdowns as a junior.
Martin was part of the Titans track team that finished second in the team rankings at the Class 6A Track and Field Championships. The 4×200-meter relay team set a national record and won the gold medal in 2015.
“As a senior now, I am trying to teach these guys what it takes to be a state champion,” Martin said. “There are right ways to do it. Every day in practice you have to have the attitude of making the playoffs.”
Martin said he was aware the magazine picked the Titans to finish outside the playoffs for the second straight season.
“We are going to have to earn that respect back,” Martin said. “Every day we practice to shock the world. We have been treating each workout like a game. Last year was bad. I never expected us to lose seven games. Teams wanted our spot and now it is up to us to get it back.”
Quarterback Kadon Harrison is also back after an up-and-down sophomore season. Harrison started all 10 games and improved each week and has shown enough to retain his starting role as a junior.
He threw for 1,125 yards and eight touchdowns in 2014.
Defensive end Brandon Jackson leads a defense looking to make major strides after a disastrous 2014. He had 60 tackles and seven sacks last year. He is joined by Brandon Artis up front and defensive back Kary Vincent has shown incredible speed over the summer.
Through it all, Harrison said he will enjoy the Titans not being picked to make the playoffs in 2015.
“All my life I have enjoyed playing the underdog role,” Harrison said.