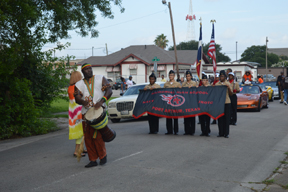 Oft told stories passed down through generations were remembered Friday in downtown Port Arthur, where a parade and celebration in Barbara Jacket Park commemorated a day 50 years ago when Texas slaves were told they were free.
Marques Armstrong, 18, marched in the Marcus Garvey Juneteenth Torchlight Parade with members of the Memorial High School Navy ROTC.
It was the first time the group participated in the Juneteenth parade — and a time when Armstrong said he could recall the stories passed down from his great-great-grandfather.
“Whenever I hear the word (Juneteenth), I hear freedom,” he said. “I have a great-great grandpa, he told stories about his mom and dad born into slavery. He told about the day they were set free in Port Arthur, and had a big feast to celebrate. Just by him telling the story, I felt it,” Armstrong said.
Scheduled entertainers in the park included Port Arthur’s own Zoe-Fashion Plate, and Port Arthur opera singer Richard Perkins, as well as The Spirit of Sankofa, which means to reach back, know your past.
E-mail: sherry.koonce@panews.com
Twitter: skooncePANews
Juneteenth is the oldest known celebration commemorating the ending of slavery in the United States. It was on June 19, 1865, that the Union soldiers, led by Major General Gordon Granger, landed at Galveston to proclaim the war had ended and that the enslaved were now free. Granger’s news came 2 1/2 years after President Lincoln’s Emancipation Proclamation – which had become official Jan. 1, 1863.
Sponsored by the African American Cultural Society, the parade and gathering the park culminated a week of events marking the 34th Juneteenth Celebration in Port Arthur.
Janet Rideaux was among the marching bands, fancy cars, bicyclists, floats, etc. participating in the parade.
Rideaux, this year’s Honorary Ms. Juneteenth, said she was humbled and honored for the designation.
“It puts me in with other great and accomplished women,” she said.
Juneteenth is a time to celebrate an important event in American history. “We study the Fourth of July, Texas Independence Day, D-day, Normandy. Juneteenth falls into that category.”
Juneteenth is a day to not only celebrate, but to educate younger people who are several generations away from strife of slavery.
Cedrick Washington, 1, of Houston traveled to Port Arthur with a unique way to bring history alive.
A native of Nigeria and a master drummer, Washington played the Djembe, a drum originating in West Africa.
“A lot of people don’t know African history because they don’t see it. My mission is to preserve, education, heal and empower,” he said.