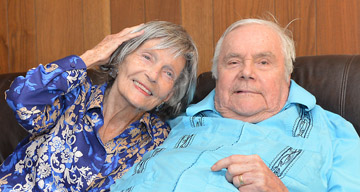 Roger Cowles/The News Joy and Harry Gardiner discuss their 70 years of marriange on their anniversary Tuesday at their home in Port Neches.

PORT NECHES — In 1943, a young Harry Gardiner fell in love at first sight when he saw Joy at Asbury Park, N.J., at a USO pavilion.

Harry plucked up his courage and asked Joy, “May I have this dance?”

Harry, now 92, married Joy, 89, 70 years ago on June 16, 1945, at the Grace Church in Nutley, N.J.  Harry’s proposal in what his bride called his “sweet southern accent” swept Joy off her feet, and the two were married before Harry shipped out to the Philippines for two and a half years during World War II.

Although being apart was difficult, they never gave up.  When Harry returned from the Philippines, he moved to Jefferson County to work at Neches Butane, and Joy followed him.  Harry became the plant manager at Neches Butane before he retired in 1978 and spent four years working with Texaco.  The Gardiners have lived in Jefferson County for 65 years, where they raised their three daughters.  Harry and Joy Gardiner are now the happy grandparents of nine grandchildren and four great-grandchildren.

Harry’s favorite memory of his wife is their first dance.

Joy said that every memory over the last 70 years is her favorite.

“We’ve just had such good times together.”

Leslie Symmonds, one of the Gardiners’ daughters, said that in addition to dancing, her parents are always singing.  “We’ll hear them through the walls late at night and just hear them singing Christmas carols,” Symmonds said.

The Gardiners said that with the exception of Harry’s time in the Philippines, they have never experienced what they would call hardships in their marriage.

“My advice for a happy marriage is to never go to bed mad at each other,” Harry said.

“It’s a real blessing to have parents with such a long-lasting marriage,” Symmonds said.  “It’s a rarity these days.”