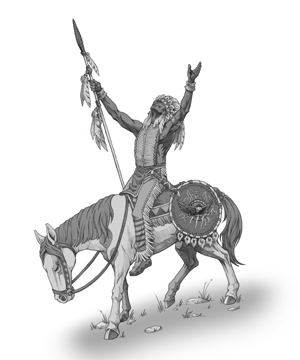 Port Neches-Groves High School alumni Bill Sealey has formed a committee and will soon start fundraising projects to place a statue of an Indian warrior on horseback on the high school campus, pending final approval from school board.

Bill Sealey has grand plans to pay homage to the pride, honor and tradition of his beloved Port Neches-Groves High School.
A member of the graduating class of 1970, Sealey is working on a campaign to have a slightly larger than life sized statue of an Indian warrior on horseback with spear raised placed on the high school campus.
Sealey, who now lives in east Texas but works during the week in the area, recently visited the Port Neches-Groves Independent School District board to voice his plan with the hopes of getting trustees’ blessing and discuss a possible location.
“I actually came up with the idea a few years back but was working too far away to do anything with the idea,” Sealey said.
Soon a committee of sorts was formed that includes classmates. Sealey has contacted Big Statues in Provo, Utah and has a rendering of the figure. Once completed, the statue will be one and one-quarter life size and about 14-plus feet in height when measuring from the pedestal to the tip of the warrior’s lance.
To help cover the cost, Sealey and committee members are looking to fundraising.
“The statue alone is about $75,000,” he said, adding that shipping and other related costs will bring the total up higher. “We’d like to have a patio around it that could be paid for by selling bricks with a students name and graduating year. Depending on where we place the statue, if near the gym we’d need about 7,500 bricks.”
The PN-G graduate hopes to recruit fellow classmates who are now brick masons or concrete workers to help with construction of the base for the statue.
He also hopes that any additional funds could be placed in a trust for scholarships for a graduating senior with the possibility of other classes pitching in funding as well.
PN-GISD Superintendent Rodney Cavness said at this time he has very little knowledge of details of the project but will meet with Sealey during the week.
“This is very generous on their part and a beautiful piece of art work,” Cavness said. “It will really beautify the campus.”
E-mail: mary.meaux@panews.com
Twitter: MaryMeauxPANews