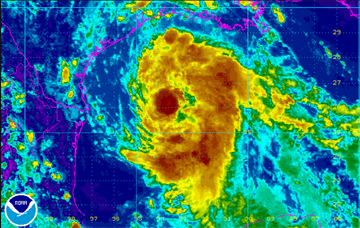 The 2015 Atlantic Hurricane season’s second tropical storm has a very good  chance of forming from a relatively large low pressure currently in the central part of the Gulf of Mexico.
If the system’s strength intensifies into tropical storm status as expected, the storm would be named Bill.
As of Monday morning, Montra Lockwood, National Weather forecaster from the Lake Charles office said,  Southeast Texas is likely not in the system’s direct path, but can expect heavy rainfall.
“At this time, it looks like the system will hit a bit north of Corpus as early tonight,” Lockwood said.
Southeast Texans should expect the fast moving system to bring 3 to 5 inches of rainfall locally, with heavier bands producing 5 to 8 inches, Lockwood said.
“We will start seeing a few of these bands moving on shore today, most coming in tonight and tomorrow. It looks like tomorrow (Monday) will see some of the heaviest rains,” Lockwood said.
The NWS expects to have another conference call with the National Oceanic Atmospheric Administration later this afternoon.
E-mail: sherry.koonce@panews.com
Twitter: skooncePANews