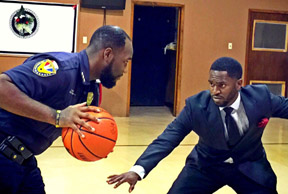 Port Arthur police and firemen will square off against the city’s pastors and ministers Saturday during a basketball game designed to not only raise money for a charitable cause, but to show a side of the team members that the public does not always get to see.
“People always look at pastors and police as stern people. We need to show the loving side to us as well,” the Rev. Jarrod Phillips, pastor of True Vine Missionary Baptist Church, said.
Phillips said God had laid it on his heart to organize the event as a way to raise money to help a family have a nice Christmas this coming year, and to bring a gospel concert to the area during the Christmas season.
The aim is to help one needy family pre-selected by the church by providing them with a cash donation. The gift can be used for whatever the family wants: Christmas presents, paying a bill, going to the grocery store, just whatever the need.
Phillips is also a gospel recording artist with two singles out, “Holy Is Our God,” and “I Made It All Over.” The singles are currently in distribution and available on I-Tunes.
In addition to Phillips, those participating in Saturday’s event include the Revs. Herb Fontenot, Donnell Johnson, Lawrence Vaughn, Kalan Gardner, Nathaniel Chevalier, Brandon Bartie, Derrick Moore, Robert King, Skip Goldman, Albert Simon Jr. and Levell Hawkins.
The group will take on a team made up of Port Arthur police and fireman, as well as Phillip’s cousin, Precinct 2 Jefferson County Constable Christopher Bates for a little added family rivalry.
Bates said he was ready for the game, and had even been training for several weeks in preparation, but wasn’t going to let his guard down thinking it would be a slam-dunk.
Afterall, the pastors may have a edge on their competition.
“They may be doing intercessory prayer right now,” Bates said.
As much as he’d like to see the police and fire team win, Bates said it was all for a good cause, and for that, he’s ready to give all he’s got.
“I’m working on y pick-and-rolls, got that down-pat; they better be ready,” Bates said.
The game will also send a positive message about community relationships.
“With the things going on in the nation, it is good we can show solidarity and that we are together in a common goal to continue to promote positiveness in the city,” Bates said.
Phillips, 30, said those participating are representative of the city’s younger pastors, and a second event, a pastor’s hymn concert, is in the planning stages for the more mature ministers.
Cost for the event is $3. Those 5 and under get in free.
Saturday’s game begins at 4 p.m. at Thomas Jefferson Middle School, 2200 Jefferson Dr., Port Arthur.
E-mail: sherry.koonce@panews.com
Twitter: skooncePANews