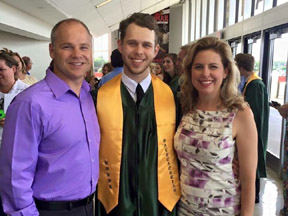 “They Found Him. Praise God!”
Those are the words posted on an emotional father’s Facebook page mid-morning Thursday after rescue crews found Aaron Rose alive 18 miles northwest of Utila, an island in the Honduras where the family was vacationing.
Aaron Rose, an Orange teen and this year’s salutatorian of his Little Cypress-Mauriceville graduating class, went missing Wednesday night after going out in a kayak to watch the sunset.
Rose is the son of Daniel and Mary Beth Rose. Daniel Rose is the pastor of Community Church in Orange.
Church board member Chester Moore said the U.S. Coast Guard found Rose alive and airlifted him to safety.
“He’s been found alive; it’s official,” Moore said.
Church members and the community have been in constant prayer since news broke on the pastor’s Facebook page that his son was missing.
“Jesus Christ is a miracle worker. Our community raised up God and lifted God on this and we give him all the glory,” Moore said.
E-mail: sherry.koonce@panews.com
Twitter: skooncePANews

Rescue crews in Hondorus are conducting a search for Orange teenager Aaron Rose, who went missing Wednesday night after going out in a kayak to watch the sunset.
Rose, this year’s salutatorian of Little Cypress-Mauriceville High School, is the son of Daniel and Mary Beth Rose. Daniel Rose is the pastor of Community Chuch in Orange.
Church members held a prayer vigil Wednesday night, and continue to request prayers from the community.
Church member Chester Moore on Thursday morning said U.S. officials have joined in the search via helicopter on the island of Roatan, where the family was vacationing.
A Facebook page, “Pray for Aaron,” has been established.

Services are scheduled for a Port Arthur man who died along with his beloved dog after being trapped inside his... read more