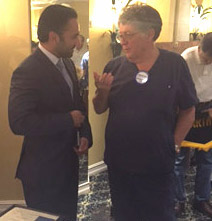 Though Osman Swati was sworn into office as Port Arthur District 6 City Councilman about a month ago, he said he does not feel like an elected official.

The feeling is not so much because he’s new to job, but rather because no one voted for him.
The 32-year-old Port Arthur businessman ran unopposed for the seat left vacant when former City Councilman Bob Williamson termed out in May.

“I did not get a chance to campaign and share my platform. I feel blessed. I am technically an elected official, but don’t feel like I was elected,” Swati told a group of Port Arthur Sertoma Club members Thursday during their regular meeting.

Elected or not, Swati has a vision for the city that is steeped in his upbringing.

Swati said he is often asked if he is related to, or knows, different families in the community from Pakistan.

He may not know all their names, but he knows why they are here.

“They all left because there was no opportunity there in Pakistan. People like my father left in search of a better opportunity. My father started a business here, we grew up here. All parents came to this land so they could give their children a better life,” he said.

About 10 years ago, Swati’s father, Mohammed Swati, returned to Pakistan to give back to his native land after starting Pak Oil and turning the Port Arthur business into a successful enterprise — the largest Exxon Fuel Distributor in Southeast Texas.

In Pakistan, Mohammed Swati was re-elected as senator in his homeland the same day Swati was sworn in as City Councilman here in Port Arthur.

But, that’s where the similarities in the two elections ended.

In Pakistan, and other third world countries, people do not take the right to vote for granted.
Here, the number of people voting — less than 2,000 in eight days — was dismal, especially among those residents who are less than 40 years old.

“I look at the youngsters over there. They would give their lives in search of justice,” he said.
As Councilman, Swati said he plans to change the culture in City Hall — to make it truly representative and reactive to the residents’ needs rather than a place to hire family, neighbors and church members, regardless of their qualifications.

Running City Hall, he said, is much like running a business.

“I feel like the opportunity and potential here is limitless. My plan is to wake everyone up, to get them involved,” he said.

Since taking office, Swati said he has received calls from people complaining about their toilets backing up — something that he has come to realize as normal for a Port Arthur City Councilman.
He believes the city can address some of its citizens’ problems such as bad streets, drainage issues, etc, but first has to look inward.

“You guys have witnessed the constant bickering. The things they (the City Council) is doing is not focused on the betterment of the city,” he said. “Uniting the people on City Council is one of my goals.”

While taking questions from the Sertomans, Swati said he thought new City Manager Brian McDougal was a “great guy,” but he would need the right support to get things done.

“If he as the right support and we let him do his job, he will do his job, otherwise he may not stay,” Swati said.

The City Manager has recently sent out Requests for Qualifications in search of a firm to conduct a forensic audit on the city’s finances. The audit is the result of a petition signed by enough Port Arthur voters to convince Council to start the process.

“There is no evidence as far as my knowledge that there is something shady going on, but they are moving forward on it,” Swati said.

Swati said he is disappointed in the disinterest Port Arthur residents have toward their leaders, including the school board.

A better school will attract more people to the area, he said.

As it is, many are attending schools outside the district.

“We have so many city officials whose kids don’t go to Port Arthur schools,” he said.
The city’s downtown has potential, but is not there yet, he said.

He warned that simply investing money in the immediate downtown area would not be beneficial in the longrun unless the surrounding area was revitalized and kept up.

“There needs to be a corridor from 73 running south all the way to Downtown so people will want to come here,” he said.

Pleasure Island, he said, has all kinds of potential if managed correctly.

“Pleasure Island can be a great place. I used to take my guests here to Pleasure Island and they couldn’t believe what we had there,” Swati said, while noting the number of studies the city has commissioned that sit unimplemented on shelves.

“City Hall is full of all kinds of plans and surveys that would turn this city into Dubai, but they do nothing with them. Downtown Port Arthur can be a great place, but not right now.”

Though he is a first-time politician, Swati will draw on his on background to lead the city, he said.
Swati completed his high school education in Falls Church, Virginia. He moved to Port Arthur in 1999 to attend Lamar University in Beaumont,  earned an undergraduate degree in business marketing in 2005, then moved to the United Kingdom to pursue a law education degree. He passed the bar in England in 2010 and became a barrister before moving back to Port Arthur that same year.

The family is also involved in hotels, apartments and various real estate ventures in Texas and Louisiana.

Swati has also served on the Port Arthur Economic Development board for nine months and represented the EDC and city of Port Arthur in the United Arab Emirates at the World Forum for Foreign Direct Investment.

He is president of the Southeast Texas Cricket League and Captain of the Port Arthur Tigers and Cricket Club.
E-mail: sherry.koonce@panews.com
Twitter: skoonce@panews.com