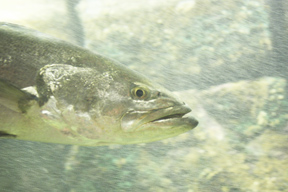 Chester Moore Jr./The News Big trout are lurking at the jetties, short rigs and in the channel right now.

By Chester Moore Jr.
The News Outdoors Editor
An amazing thing happens when sandy-green water reaches the beach.
Speckled trout start biting at the jetties, in the surf and the action in the channel starts to pick up as well.
I don’t think the trout move in, but I do think for some reason they are easier for us to catch or perhaps their “bite button” gets pushed somehow.
Back in the late 1990s my cousin Frank Moore and I were at the “Leaning Tower of Pisa”, which is the old gas rig frame destroyed by a hurricane and still sitting a couple of miles off of Sea Rim.
That rig can be tremendous for trout but it’s only when the water is sandy-green to clear.
We watched an incoming tide about a mile out move in over the course of an hour and the fishing went from zero trout to productive as soon as the clearer water hit.
At the jetties, I have seen pockets of clear water produce fish when other areas seemed barren of specks.
In the channel the same can ring true but in my opinion it is more about tidal movement (incoming is best in most circumstances) and how water moves in and out from the Gulf.
Anglers fishing the south end will report catching “surf run trout”, meaning a stockier brand of speck, with an overall lighter color.
These are the fish brought in from the incoming tides and sort of moving in and out with their prey in the plumes of sandy-green surf water There is no mass migration of trout but anyone who has fished our area for long knows in the summer, there is some movement from the jetty area to the channel and south end of the lake.
Savvy anglers should look for emerging slicks, the small round spots of fish oil spilled when trout feed on shad and other prey items. The smaller the slick the better because it means the fish are still nearby. Avoid fishing slicks around crab traps. Those usually come from the bait inside.
Shrimp jumping along the surface and birds are a more obvious sign although at the jetties birds usually lead to Spanish mackerel more than trout. Birds on the lake, is usually trout are reds. Birds in the surf or at the jetty area could be anything.
One of the true key areas to find big trout at the jetties now is around the washouts where erosion has created holes that allows water to trade from the channel to Gulf side. These areas are great places to soak live mullet or shrimp or chunk Mirrolures and other sub-surface baitfish imitations.
The short rigs or nearby oil and gas platforms can be great for trout as well. I haven’t heard any good reports yet this year but most of the anglers who fish are tight-lipped and not fond of sharing information.
That’s understandable since they produce some of the biggest trout of the summer but again the trick to catching the fish there is clarity. If the water is muddy forget it.
Another important factor is not thinking the trout are everywhere around the rig. They are often on one small piece of cover.
The big gas rig just southeast of the Sabine jetties that was taken up a decade ago had a boat wreck on the southwest corner. Almost without exception, that wreck held most of the trout. Work all around the rig until you find the bite and pay special attention to the exactly spot. Sometimes you can get a few feet off and lose the fish.
Surf fishermen would do well to get out before daylight and start chunking into shallow zone of the first and second sandbar before light hits. Big trout tend to prowl closer to shore before daybreak.
Don’t enter the water without a life preserver on and don’t go alone. Rip currents can catch anyone off guard and have been responsible for numerous deaths off the Texas coast in recent years.
Throw topwaters early and always bring alone some silver spoons. The trout in the surf love them and if they’re not biting, Spanish mackerel do cooperate and they are fun to catch.
We are in a fun time of year for trout fishing. The fish are spread all over the place and for the anglers who knows how to read the signs in the southern tier of Sabine territory there are plenty to be caught.
(To contact Chester Moore, e-mail him at chester@kingdomzoo.com. You can hear him on “Moore Outdoors” Fridays from 6-7 p.m. on Newstalk 560 KLVI.)