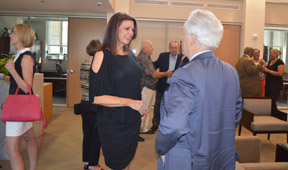 A manufacturing company that recycles textile waste to produce new products is coming to Port Arthur and with it, 500 new full-time jobs.

In a packed reception at Port Arthur’s Economic Development building Wednesday, representatives from Ryze Renewables announced the newly-formed company would be setting up shop in Port Arthur.

The company is investing $200 million in two different businesses. The first will take scraps from the textile industry to make medical and personal care products, luxury garments, and product packaging. Textile waste left from production of the products will be recycled further in a second facility that manufactures floor tiles.

The project has been a year and a half in the making, Joy Nunn, managing partner and inventor of the patented process, said.

“What we are doing is rejuvenating fiber, taking scraps and putting it through a patented process for people all over the world to use,” Nunn said. “The process is 100 percent green technology.”

The company plans to manufacture 10 product lines ranging from cotton to polyester. Seven of those product lines have already been sold, Nunn said.

Because so much shipping is involved, the manufacturing facilities will lease two existing buildings at the Port of Port Arthur. Those buildings will be retrofitted, and are expected to see the first shipment of equipment in January 2016.

The company expects to be operational by July or August 2016.

Orangefield native Michael D. Brown, Ryze Renewables managing director, said he was proud the company was locating his home to build the facilities.

“I just wanted to have the chance to come back where I am from and bring this opportunity to Port Arthur,” Brown said.

As incentive to lure the company to Port Arthur, the EDC agreed to provide a $1.5 million incentive. Of that, $750,000 will be granted upfront to help pay for equipment and the retrofitting process. The remaining $750,000 will be based upon payroll and employment, Floyd Batiste, EDC director, said.

During the reception Nunn introduced those who are integral to the operation including a team of technical engineers from Italy.

“I invented the technology, but could not have done it without them,” she said.

Speaking on behalf of the team, Frank Levy with Stellamcor, Inc., said they had worked with Nunn for many years.

“We have prepared for this project for five years and are delighted to be here with Mike Brown and Joy Nunn,” Levy said.

Because the company does not plan to bring in many of its own workers, they have partnered with Lamar State College – Port Arthur, Lamar Institute of Technology, Lamar University and the Texas Workforce Commission to train its employees.

Jobs will range from maintenance to engineers, accounting personnel, and machinery operators, just to name a few. Average pay will be around $42,000.

Nunn said Port Arthur was selected because both the state of Texas and the city had a lot to offer.
“Texas is a really good business state, and the port just opened arms to welcome us here,” Nunn said.

The city’s logistics —having both rail and ocean access — makes it a desirable site to bring in the raw materials from Asian, Bangladesh, Sri Lanka and the Caribbean, Nunn said.

“We are happy to be here. We love the people, love the community,” Nunn said.

Port Arthur Mayor  Deloris “Bobbie” Prince said she is excited about what the project means for the city’s future.