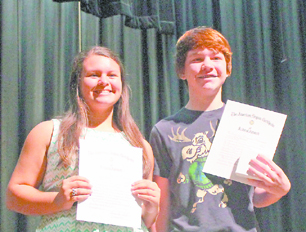 These Canines were recognized for their qualities of Courage, Honor, Leadership, Patriotism, Scholarship, and Service by the Butler – Redd American Legion Post 493 in Nederland.  Silmi Karowalia was named the Artist of the Year.  Gianni Pena, Antonio Valma, Kevin Phung, and Taylor Watts won iPad Minis for perfect attendance this school year.

Their names were randomly drawn from the large pool of students who came to school every day.  Silver Eagle coins were presented to eight students for maintaining perfect attendance during their four middle school years.