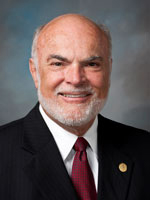 My Five Cents: Much accomplished in 140-day session

The 84th Legislative Session has come to an end. For the first time in many years we are not going back into a special session, which shows how much the Legislature accomplished in the last 140 days.

My weekly column will now revert back to a monthly column and I will continue to keep you updated as to what is happening not only at your state Capitol, but also in your state.

Here are five things that happened this week at your Texas Capitol:

Over the past few months, I have kept you updated regarding SJR 5, legislation I filed to constitutionally dedicate funds to the State Highway Fund (SHF). I am pleased to share with you that it passed both chambers and Governor Abbott has signed it into law. As it is a constitutional amendment, it will be sent to the voters for approval in November 2015.

This constitutional amendment will dedicate a deposit of $2.5 billion per year to the SHF, to build non tolled roads and bridges, as long as our state’s economy continues to grow. In addition, each fiscal year beginning in 2020, 35 percent of all Motor Vehicle Sales, Use and Rental Taxes revenues, in excess of $5 billion, will be deposited into the SHF for the same use.

It is estimated the combination of these deposits will grow to approximately $4 billion per year within 15 years, adjusting for population growth and inflation. In addition, there are protections in place to ensure that in times of recession, the Legislature has the ability to reduce a portion of these deposits by a 2/3 vote of both chambers. If passed by the voters, this will be largest single increase in transportation funding, in Texas history.

Fulfilling the only constitutionally required task of the Legislature, the Senate and House ended session having approved a $209.4 billion budget for the next biennium. The budget included $811 million in border security funding, approximately $3 billion in combined additional funding for public education and higher education, as well as funding for mental health and roads. It also includes $3.8 billion in property tax relief and franchise tax cuts for Texas businesses.

The crude oil export ban was put into place in the 1970’s during the Arab oil embargo. By lifting the ban, it is believed that it will benefit U.S. trade, create more jobs for Texans and lower gas prices. With new and proposed liquefied natural gas terminals being built in Texas, the state is asking for the federal government to speed up the permitting process, which currently can take years to navigate. The Texas Secretary of State will send official copies of these resolutions to the President, and members Congress including the Texas delegation.

Over the past few months, you may have heard about proposed legislation for open and campus carry. Both pieces of legislation were passed and now await the Governor’s signature. HB 910 would allow for license-holders to carry handguns openly in a hip or shoulder holster. Businesses are able to prohibit persons to come into their premises with a concealed or open carried handgun if they post proper signage.

SB 11 would allow for concealed carry on a public university campus, with a provision to allow private universities to opt out. The legislation would allow universities to carve out gun-free zones in locations of their choice and establish their own rules regarding where handguns are carried and how they are stored. Both pieces of legislation refer to only those who carry a concealed handgun license.

Did you know that 6,276 bills were filed in the Legislature this session, and 1,323 of those were then passed by both chambers and sent to the governor? At this point, 323 have been signed by the Governor and 3 have been vetoed. As I write this column, Gov. Abbott has approximately 1,000 bills left to decide what to do with before June 21st. If he takes no action upon them by that date, they automatically become law.

Robert Nichols of Jacksonville is state senator for much of East Texas, including all of Orange County.

A new approach to city leadership

Over the years, our city government has seen its fair share of changes in leadership positions. Through these changes, our... read more