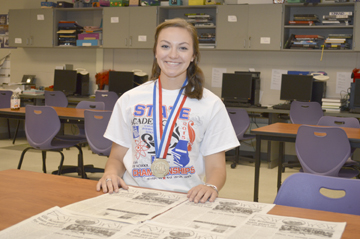 PORT NECHES — When Laurel Brittain heard Charles Breithaupt speak during the University Interscholastic League’s feature writing contest at state competition, she took heed.
Brittain said she already knew about Breithaupt, a UIL executive with numerous career accomplishments in education, as well as some of his basic biographical information. But one thing stood out in the 30-minute long press conference she was required to attend as part of the contest — he would be the last speaker ever for the event as UIL is changing to a prompt-form competition.
With this in mind, Brittain formulated her Class 5A State Champion winning feature story not to focus on Breithaupt’s career but on the change he has made in the lives of students across the state of Texas.
Seated in teacher Janis Ryan’s journalism classroom at Port Neches-Groves High School nearly a week after her high school graduation, Brittain spoke of the competition and her worry that her paper wasn’t very good and of the future.
“It was stressful. I was nervous,” Brittain said. “When I walked out I gave my paper to Ms. Ryan and told her I don’t know what I wrote. I thought it was horrible.”
But it wasn’t horrible at all. Ryan believes it was Brittain’s decision to focus her story on Breithaupt being the last speaker instead of a biographical feature story was what earned her the state title.
Brittain started journalism in her sophomore year followed by advanced journalism and yearbook work. This year she was the Pow Wow editor as well as on the yearbook staff.
“Saturdays were spent studying for UIL academics in addition to writing and yearbook here plus about 45 minutes in class practicing writing,” she said.
Soon she will head off to college, beginning with Blinn College and later Texas A&M where she will major not in journalism where she won state accolades but in either mechanical or constructional engineering. Math and science are her strong points, she said, adding that she maintained a 99 in calculus all year long.
“I can use my writing skills for anything,” she said referring to the skills she learned through writing. “It makes me more personable. That’s what I have going for me, I can communicate well.”
Brittain hopes to follow in her father’s footsteps career-wise. Her father, Mark Brittain, is employed with a construction engineering company.
“I’ve learned a lot from him,” she said. “He told me I can do anything I want and this (field) would be good for me and I can be very successful.”
Ryan, who was in the room during the interview, looked over and smiled.
“She is one of the best students I’ve ever had. She uses both her left and right brain,” Ryan said. “Other UIL groups wanted her; ready writing, literary criticism, number sense. She said no to those.”
For Brittain, feature writing is all about creativity.
“I can play with words and be more creative,” Brittain said. “The creativity in me comes out when I write. I can take the facts and make my own story.”
Her creativity also crosses over to other interests. She sings, plays guitar and paints. Her mother, Leigh Ann Brittain, was is a former art teacher at PN-G High School and the two share the interest in painting. The daughter prefers flowers and landscapes while the mother paints people, she said.
“I’ve been to art museums in New York, Dallas, Houston and Austin. Most people my age would hate going to an art museum,” Brittain said.
Brittain is also a varsity letterman in volleyball, which is a path her father had thought she’s continue — at least until journalism came along.
“I called it her sophomore year,” Ryan said of Brittain’s talent in writing. “I knew she had the potential to win state.”
Brittain is Ryan’s first PN-G student to win state at feature writing. Three years ago she had a student place in state in news writing and had three state champions when she worked at Westbrook High School in Beaumont decades ago. Ryan has been at PN-G for 23 years.
“The neatest thing, she’s such a wonderful person. She’s always been there when I needed her and doesn’t mind bossing people around when needed. Most of the time she tells me what needs to be done,” Ryan said. “This couldn’t happen to a better person. When I rank the top students I’ve taught in my 32 years of teaching, she’s in the top. I’ll never forget her.”
E-mail: mary.meaux@panews.com
Twitter: MaryMeauxPANews