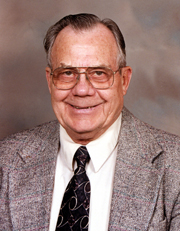 Leslie Ray Powell, 88, of Beaumont, passed away June 2, 2015. He was born on July 14, 1926, in Purdon, Navarro County, Texas, to Zuma Hardy Powell and Leslie Earl Powell. He grew up near Corsicana in Navarro County, Texas. He was of the Episcopal faith.
In addition to his wife, Ray is preceded in death by his parents; a sister, LaDel Pugh; a son, Randy Powell; and a step-son, Michael Placette.
Ray is survived by one son, Roger Powell and his wife, Cindy, of Nederland; four step-sons, David Placette of Beaumont; Karl Placette of Franklin; Pennsylvania; Jay Placette of Bismarck, Arkansas; and Richard Placette of Nederland; two brothers, Clifford Powell of San Antonio and Curtis Powell and his wife, Barbara, of Beaumont; and several grandchildren, great- grandchildren, nieces and nephews.
A gathering of Mr. Powell’s family and friends will be 5:00 p.m. until 9:00 p.m., Thursday, June 4, 2015 at Broussard’s, 1605 North Major Drive, Beaumont. His funeral service will be 10:30 a.m., Friday, June 5, 2015 at Broussard’s, with interment to follow at Tyler Memorial Park, 12053 Highway 64, Tyler.
In lieu of flowers, memorial contributions may be made to the Alzheimer’s Association, 700 North Street Suite M, Beaumont, Texas 77701.
Complete and updated information may be found at: broussards1889.com.