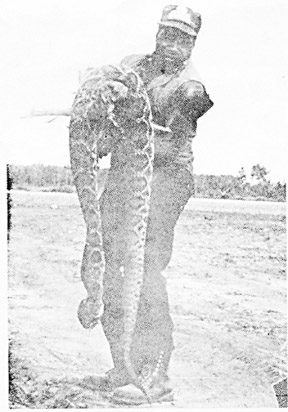 By Chester Moore, Jr.
This photo has been floating around Texas for years.
I first saw it in Sweetwater at an event 21 years ago and later ran into it at a restaurant in Freer.
It shows an unidentified man with a very large rattlesnake and most of the time it featured text saying it was killed in Texas.
Reader Westley Wright uncovered the source of the mystery and sent me a link to a newspaper in Georgia after I put the word out for help.
As I suspected the snake was an eastern diamondback which grows larger than the western does, especially in the girth department. The man in the photo’s name is Lavon Grantham and the snake was killed in a cabbage patch in South Georgia. The photographer’s name was Jimmy Lamb of the Glennville-Sentinel according to the credit on the photograph Mr. Wright sent us to examine.
To make things more interesting I spoke with Norman Anthony, who was familiar with the story and contacted the Glennville-Sentinel’s Editor Pam Waters. Here is her reply to whether or not Mr. Grantham killed the snake.
“Yes, he did, and the snake was killed Sept. 1, 1982, in a cabbage patch in Tattnall County. The snake was killed by Grantham.
“The length and weight were not taken, but from the photo taken one can see by the man’s bulging bicep that the snake was extremely heavy, with Mr. Grantham between 5 1/2 and 6 ft. tall, and the snake was shown doubled over on the stick. Jimmy Lamb was working for The Glennville Sentinel at that time, and I was thankful the photo was in focus, since we surely didn’t know anything about trick photography.
“I had bought the newspaper in 1981 and had never been in a newspaper office before, with no journalism or photography background whatsoever, just a desire to print a good local newspaper each week.”
This photo has been circulating in restaurants and gas stations for decades and in recent years has made it to the Internet. It’s exciting to finally have an answer.
(To submit photos to the Critter Cam project, e-mail them to chester@kingdomzoo.com. Put Critter Cam  in the subject line.)

By Chester Moore, Jr. Texas anglers are in the middle of the now annual red snapper season. The only problem... read more