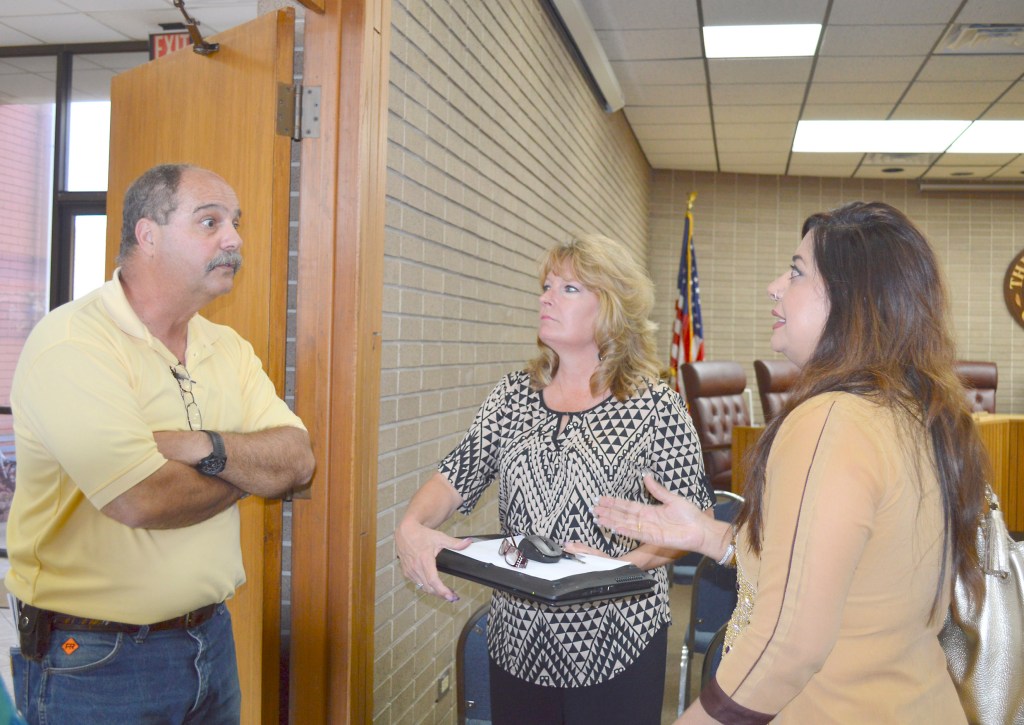 Rodney Pacetti, left, chairman of the Groves Planning and Zoning Commission, hears comments from project manager Germaine Boudeaux and Rani Akhtar, whose family owns Axis Apartments following a meeting on Monday. The commission denied the request of the owners for construction of luxury apartments adjacent to Axis.

GROVES — With little fanfare and just over a dozen people in attendance, Groves Planning and Zoning Commission denied the request for a specific use permit for the expansion of Axis Manor Apartments on Monday.
Planning and zoning commission chairman Rodney Pacetti said the overwhelming disapproval of the citizens in the area of the complex was a main reason for the denial of the request.
“We are primarily a single family dwelling or bedroom community and we are mindful of the well being of the community. We are not here to do things to further the tax roll,” Pacetti said. “There are concerns from the residents around the complex.”
With that said Pacetti announced a motion to deny the request for the specific use permit as the small crowd erupted in applause. The vote was unanimous.
“We strongly recommend you continue maintenance on the apartments. This shows a positive,” he said.
Pacetti said he has driven by the apartments recently and did so again before the meeting and noted some maintenance issues were being addressed.
A.L. Whittredge, a member of the commission, said he is satisfied with the decision to deny the request.
“The place (Axis Manor Apartments) is going down but they are doing some repairs finally,” Whittredge said after the meeting.
The owners of the apartment complex, A&A Housing of Orange, were on hand for the meeting with the exception of Jeff Akhtar. Neither his wife, Rani Akhtar, or project manager Germaine Boudreaux, gave comments to the media.
The scene inside the city council chambers was far different from the May 18 council meeting where every seat was filled with more residents lined up at the doorway and in the foyer.
The owners had hoped to construct 108 units in the new Palms of Groves apartment community adjacent to the complex, 6775 25th St., for working people and their families with two and three bedroom units with an average rent of $1,000 per month.
Residents within the 200-foot radius as well as the nearby are voiced concerns the property hadn’t been maintained properly in the past 10 years since the Akhtar’s took ownership. Complaints ran from traffic and parking issues, trash and littering to crime.
The issue must now go before Groves City Council for final decision.
E-mail: mary.meaux@panews.com
Twitter: MaryMeauxPANews