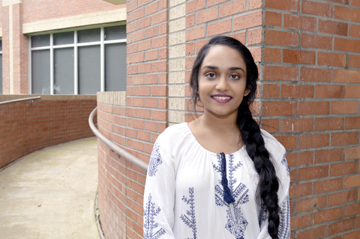 PORT NECHES — Priya Amin’s name may one day be spoken in reverence as a leading geneticist working in the field of oncology.
Amin, 17, who graduates in the top 2 percent of her class at Port Neches-Groves High School, will soon head to Harvard to study genetic engineering and oncology.
She had her choice of a number of universities but chose Harvard because of the Broad Institute and the genome project, she said.
“In my freshman year, as soon as I read the chapter on genetic cloning and about cancer research I became interested,” Amin said.
She realized that if there would be any big scientific break-throughs it would be in the field of genetics. And she’s probably correct. Last November scientists from Harvard and the University of New South Wales have found the key to reversing the aging process in mice, according to the Harvard Gazette.
Amin, a summa cum laude graduate, said the hardest course at PN-G for her was advanced physics.
“It was extremely difficult and it challenged me in a different way,” Amin said. “It was a lot harder than biology and chemistry.”
Amin has always been interested in science and math, not English or history, she added.
The top student also works to celebrate her culture and studies Indian classical dance in Houston. She has made the trip to Houston every Saturday for the past six to seven years.
“It is part of my culture and my mom took the dance classes in high school and college,” she said.
She is also part of the India Association of Southeast Texas where she dances as part of India Fest, certain religious functions and fundraisers such as March of Dimes or Cancer walks.
Amin also takes piano lessons, is a member of the Key Club, National Honor Society and a four year participant in the University Interscholastic League where she competed in number science, calculator, math and science.
She is the daughter of Dr. Murlidhar Amin, a cardiologist, and mom Dr. Nisha Amin, a psychologist. Her brother, Anuj Amin, graduated from PNG last year and just completed his first year at the University of Pennsylvania.
“My brother and parents are my inspiration,” she said. Both her brother and parents are very supportive of her. Anuj, she said, is studying international relations and world religions and working toward a degree in corporate law.
To say her teachers and staff are proud would be an understatement. Assistant Principal Pat Briggs called Amin a well rounded student.
“She’s competed in academics and music and has been very active with service with the Key Club,” Briggs said. “Yes, we’ll miss her but her contributions to PN-G will remain.”
E-mail: mary.meaux@panews.com
Twitter: MaryMeauxPANews