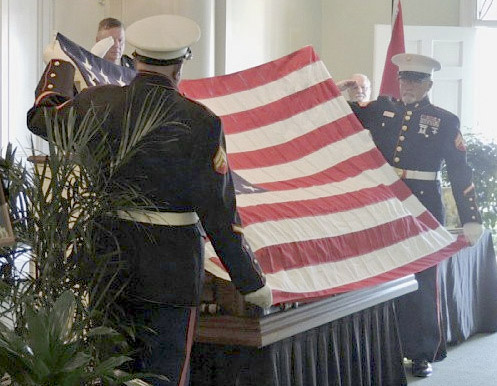 NEDERLAND — Mike Keys lost a good friend a few weeks ago.
His friend, Otis E. “Bud” Martin, was a decorated retired U.S. Marine who was sent to fight in the Vietnam War at the tender age of 19 and rode in tanks for 13 months.
When Martin, of Nederland, passed away earlier this month, Southeast Texas Veterans Service Group was there to provide military funeral honors free of charge. The group was also there two months prior at the funeral of Martin’s father-in-law, Charles Johnston. Johnston, a U.S. Navy veteran who served during World War II, was laid to rest at Colmesneil Cemetery in Tyler County.
“I was at both services, and they did an outstanding job,” Key said of the Southeast Texas Veterans Service Group.
Key said the group did a heck of a job honoring his late friend and friend’s father-in-law.
“Years ago I happened to be in Washington, D.C., at Arlington when they were doing a funeral there,” he said. “These fellows right here, they rank right up there with the young men who perform those funerals everyday. They’re excellent.”
SETVSG members Ret. Army Capt. Jerry Kelley, Ret. Army Sgt. First Class Johnny Colunga and Ret. Marine Corporal C.P. Williams make it a point to attend and serve at the funerals of fellow veterans. They receive no compensation and all donations, which are tax deductible, go back to the group which acts as a veterans ministry.
The donations help defray the cost of operating expenses such as the purchase of uniforms, rifles, equipment maintenance and general office expenses. Every penny is recorded both on paper and electronically.
Already this year, the group has served at more than 102 veterans’ funerals. They typically work in a 25-mile radius of the area but do go out of town occasionally when requested, such as the case with Johnston’s services, Kelley said. When they do, they split expenses and carpool.
Colunga takes an important role in the group, often working with the funeral homes and the deceased’s family.
A major item needed to help research military service and awards is a DD214 form, which details the persons service. The important document is something every veteran needs to have.
“We also do research, look at timelines of when the person was in service,” Colunga said.
After the research is concluded, it is handed over the person acting as chaplain who pens a moving tribute to be read during the service.
Colunga is also responsible for coordinating the volunteers with the different tasks such as posting of colors, folding and presentation of the flag to the deceased’s family, three volley rifle salute and the sounding of taps.
The donations they receive, whether large or small, are all meaningful.
Several years ago, the group performed services at R.S. Farmer Memorial Cemetery, formerly known as Farmers Memorial Cemetery, in Silsbee.
“A little old lady (widow) came towards me with a few bucks in her cupped hands. It was $38 and some change,” Kelley said. “I said, ‘No ma’am, I can’t take this.’ But she said she wanted us to have it. I felt just like if I would have received a $1,000 check.”
The group often sees families who try valiantly just to provide a funeral for their loved one, he said. The best part is not the donation but the handshake or a hug from the family member.
Williams explained that during the funeral, they expand on the veteran and his or her service. Often the family isn’t even aware of the loved one’s military service and ask for the notes read.
Sometimes the SETVSG works in conjunction with other military veterans groups to honor a deceased veteran.
One recent set of services was held for Allen Dunsworth of Port Arthur. Dunsworth was a U.S. Marine who served three tours in Vietnam and belonged to several organizations including the Combat Warriors Motorcycle Club, American Legion Post No. 7 and the Combat Veterans Motorcycle Association Chapter 23-13. His brothers and sisters with the motorcycle group were in attendance and formed a procession for Dunsworth, placed flags outside the services and more.
Dunsworth himself had traveled to the funerals of fallen veterans to make sure their services honored the veteran, his brother Kelley Dunsworth of Illinois said.
The CVMA, which played a large part of the deceased veteran’s life and in his death, consists of combat veterans from all branches of the armed forces who ride motorcycles as a hobby. Their mission is to support and defend those who have defended our country and freedoms.
“I didn’t know he belonged to an organization such as this. They (CVMA) looked at him as a brother, as someone they would go into combat for if need be,” Kelley Dunsworth said.
The Southeast Texas Veterans Service Group was also there, Capt. Jerry Kelley said.
“It was quite moving for us. I seen it as an extension of the family he grew up with. They (both groups) felt he was part of them, and he felt part of them,” Kelley Dunsworth said.
The deceased veteran’s wife, Vicki Dunsworth, said the groups did a fantastic job and was especially pleased that a chaplain was there to speak with family.
“After the service, the flag was folded and there was a beautiful presentation to myself from them,” Vicki Dunsworth said.
The whole experience helped the new widow, from the work of the CVMA, to the American Legion Post to the SETVSG.
“I can’t begin to express the gratitude and professionalism and respect they had for my husband, and for the service as well,” she said.
The SETVSG also goes out into the public visiting schools, teaching youth the proper way to fold a flag, perform taps and other duties at churches, and have attended the Texas Frog Fest at Crystal Beach benefiting the Lone Survivor Foundation.
For more information on the Southeast Texas Veterans Service Group visit www.setvsg.com or call 365-3508.
E-mail: mary.meaux@panews.com
Twitter: MaryMeauxPANews