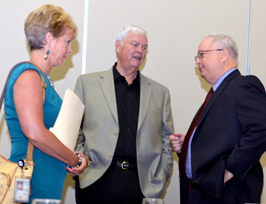 A glut in United States natural gas production, while it means hard times for those in the oil and gas industry, here in Southeast Texas the push to find a source for the stockpiles could mean even more of a boon to an area that is already benefiting from the nation’s energy renaissance.
In 2003-2204 when Sempra Energy first proposed development of a liquefied natural gas facility in Port Arthur, the company could not have guessed that abundant supplies of shale gas produced by hydraulic fracturing technology and horizontal drilling would derail the company’s plans to build a regasification terminal to import sub-zero cooled liquefied natural gas to Port Arthur, Marvin L. Ivey, Commercial Development of Sempra Energy, said Tuesday.
A decade later, those plans have changed with the focus shifting from importing the product to exporting it.
Ivey detailed Sempra’s latest plans to build a natural gas liquefaction and export terminal in Port Arthur Tuesday as guest speaker at the Greater Port Arthur Chamber of Commerce Leadership Breakfast.
‘If you first don’t succeed, go big,” Ivey said, adding that it was a tough climate to work in today for a big project.
Sempra, a San Diego-based energy company, has come back to look at its Port Arthur property with plans of investing from $4 to $10 billion  for a project that would include two natural gas liquefaction trains  for a total export capacity of approximately 10 million tons per year.
Ivey said the Port Arthur 2,900 acre site, which includes 3 miles of waterfront property, is ideal because of its proximity to the Gulf of Mexico.
“This site is well situated to the project as we move forward,” he said.
In March, the company filed for its Free Trade Agreement, and anticipates filing for Federal Energy Regulatory Commission permits in Fourth Quarter 2015.
In 2017, the company hopes to start construction. At its peak, the construction process is expected to create an estimated 3,000 jobs to the area, with 200 permanent jobs for ongoing operations when the project is completed in 2021 or 2022.
“There’s a lot of risk dollars going into a project like this,” Ivey said.
As part of the proposed project, Ivey said the company planned to move a 3- mile portion of Texas 87 between the Intracoastal Canal Bridge and the Keith Lake Bridge.
With the advent of the shale gas production mostly from Pennsylvania and New York, Ivey said the U.S. is now in the position to no longer be energy dependent on other nations.
“What’s changing the world today is what’s happening in natural gas. The drop in prices is devastating to the oil and gas industry,” Ivey said. “If we don’t find a place to move the gas, then it does not come out of the ground, and those people in the oil and gas industry do not work. We are trying to find a liquid market where we can move the gas.”
The Port Arthur LNG project dovetails with the company’s $10 billion three-train plant at its existing import terminal in Hackberry, La.
If the Sempra LNG facility is successful, it would be the third LNG project to be built in the area.
Sabine Pass’ Golden Pass LNG Terminal is among the largest terminals in the world, capable of importing approximately 2 billion cubic feet of natural gas per day. The company is proposing to add export capabilities to its existing LNG import terminal. The company’s website stated.
Construction of Cheniere’s Sabine Liquification Project is expected to be completed by the last quarter of 2015, according to the company’s website.
Development of the Port Arthur LNG liquefaction project is contingent on completing the required commercial agreements, securing all necessary permits and approvals, obtaining financing and incentives, reaching a final investment decision and other factors associated with the investment
On May 28, the Port Arthur LNG project and FERC will host an open house to  present information and to answer any concerns the public might have about the project.
The public hearing is scheduled in two sessions to allow everyone the opportunity to attend, from 11:30 a.m. until 1:30 p.m. and from 5:30 p.m. until 7:30 p.m. at the Carl Parker Center.
E-mail: sherry.koonce@panews.com
Twitter: skooncePANews

Swati to be sworn to PA Council in today