“Pike” in Southeast Texas? Yes! And eels too! 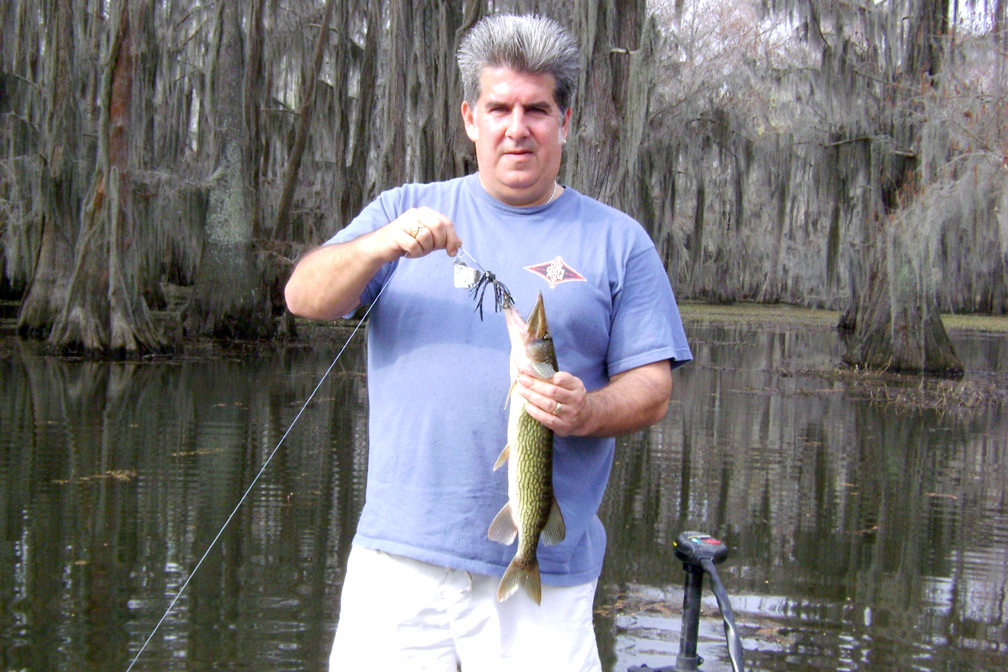 Photo courtesy Angelo Landrum Angel Landrum caught this big chain pickerel while fishing on Caddo Lake. The biggest specimens in the state are found around Caddo and Lake O’ the Pines.

Did you know there are pike right here in Southeast Texas? The chain pickerel, a close cousin of both the northern pike and muskellunge (musky) can be found right here in local river and bayou systems, especially in the Sabine drainage. Years ago my Dad caught one in a cast net and brought it home to show me before taking it back to the water release. As a little boy who constantly read Field & Stream and Outdoor Life, I was enamored with the idea we had a pike right here at home. It seemed like you could not pick up a copy of those magazine without seeing a huge pike or musky. According to the Texas Parks & Wildlife Department (TPWD), chain pickerel are usually olive-green or yellowish-brown on the back and sides, shading to a creamy yellow underneath. “There is a distinctive pattern of interlocking dark bands on the back and sides that is reminiscent of a chain-link fence. During their first year, they may reach 12-14 inches in length.” “Growth slows somewhat during the second year when they may attain lengths of 1.5 feet. In Texas they typically reach sizes of 3-4 pounds and about 2 feet in length.” Chain pickerel are distributed along the Atlantic coast of North America from New Brunswick and Nova Scotia south to Florida. “The species is found in the Mississippi River drainage from the Gulf Coast as far north as Illinois and Indiana, and may be found in Gulf drainages as far west as the Sabine and Red rivers in Texas.” I have found them in Adams Bayou in Orange County and they are extremely abundant in the shallow, bottomland areas around Deweyville although most are small. We also have American eels, a species that occasionally surprises trotline fishermen. These eels have a fascinating life history. “Adult eels spend most of their lives in freshwater, although the amount of time may vary among individuals. At some point, however, adults leave their freshwater habitats and move toward the Sargasso Sea,” according to TPWD. “By the time American eels get close to the coast they are about 6 inches in length. The species begins to develop coloration only when the young reach near shore areas. Once they reach freshwater, females continue to migrate deep inland as far up rivers and tributaries as they can. Males remain much closer to coastline areas. Eels tend to hide under rocks during the day, and venture out only at night to feed.” The males and some young eels are caught at the jetties and at certain times of year in the surf. The biggest, however, are in the river systems. The state record is 6.45 pounds and measured 42 inches. The world record was 9.25 pounds. When venturing into the Gulf of Mexico, we can also found moray eels, a species with large, sharp teeth and that can grow up to eight feet in length. These are found around reefs and oil rigs and are rarely encountered by fishermen. Divers occasionally see them, especially around the Flower Gardens reef out of Galveston. We talk in some form or fashion about reds, specks, flounder, crappie and bass pretty much every week on these pages. It is nice to be able to look at some of the lesser-known species that swim in our local waterways. Pike in Southeast Texas? You have to admit. That is pretty cool. (To contact Chester Moore, e-mail him at chester@kingdomzoo.com. You can hear him on “Moore Outdoors” Fridays from 6-7 p.m. on Newstalk AM 560 KLVI or online at www.klvi.com.)