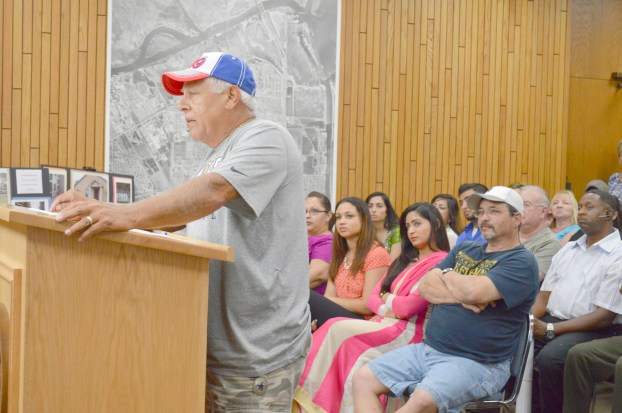 GROVES — Groves residents packed city council chambers and even the foyer Monday night to voice their concerns about the expansion of Axis Manor Apartments.
The owners of the property, Jeff Akhtar of A&A Housing of Orange, has requested a specific use permit for the expansion of the apartments, 6775 25th St., an add 108 new units. There are plans for on-site security and management and just recently a fence was added to the property. Rent would range from $875 to $1,500 for the apartments.
Akhtar, who was in attendance with family and some employees, were met with wariness and distrust. The owners purchased the property after Hurricane Rita in 2005 — a main issue with the homeowners who wondered why the property hadn’t been maintained in the past 10 years. Complaints ran from traffic and parking issues, trash and littering to crime.
Councilmember Sidney Badon addressed Akhtar directly regarding the 10 year span.
“In that 10 years span you really haven’t done anything to it,” Badon said. “That’s my ward, I drive that ward and my mother-in-law lives off Taft. There have been no improvements except to slap on a coat of paint. I don’t understand why nothing has been done in 10 years.”
No property owners spoke in favor of the issue during the nearly two hour long meeting and all homeowners who took to the podium did so against the expansion.
Insurance agent George Taylor owns real estate around the complex and some years ago had a project to build new homes fail because of the proximity of the apartment complex.
Richard Bienvenue Jr. has lived on Maple Avenue for 15 years. He described the downward spiral of the complex where there are beer cans and bottles littering the area and cars parking along the roadway.
“There’s been a major change since these guys took over. I don’t like what I see. Me and my wife are talking about moving,” Bienvenue said.
Mandie Champagne is the owner of one of the townhomes along 25th Street across from the apartment complex. She called herself a “trash picker-upper” because of the litter spread from the complex to the nearby convenience store while longtime resident and homeowner Oscar Proenza said he has seen residents of the apartments bring their garbage to a nearby church’s dumpster.
Groves resident Cheryl Richie has seen firsthand the rotted wood, destroyed mailboxes and trash along the sidewalks.
“I deliver mail there. I’m friends with half the people there,” Richie said while addressing Akhtar. “I have personally smelled and seen people smoke dope there. I’m just letting y’all know the condition of the apartments out there.”
Akhtar said he heard the same complaints about a complex he owns in Irving. At that time he made a promise to their city leaders and now, three years later, there are no complaints, just a nice gated community. He said regardless if they are granted the permit to expand, he will work to stop tenants from parking along the street.
Ivan Hughes, who has worked for Akhtar on some of his new construction, said Akhtar is a ‘man of his word.’
“I’ve actually done this work,” Hughes said as he pointed to a poster board filled with photos of upscale apartments. I agree with y’all. I’d like to see something done. I wouldn’t w ant to look at a piece of trash.”
Hughes assured the crowd that Akhtar has big plans for the complex.
Groves Police Sgt./Det. Robert Phillips presented crime statistics for all of the apartment complexes in the city of Groves. What he showed was that Axis Manor was right in the middle with 48 units and 47 calls for service. Tropicana Apartments had the best stats with 88 units and two calls for service. A majority of the calls at Axis manor were disturbance calls not property type crimes.
Toward the end of the meeting Akhtar explained that when the complex was purchased there was no insurance hence no Hurricane Rita money to make repairs.
Groves Mayor Brad Bailey manned the gavel and from time to time asked for crowd members to act with respect but minced no words when talking about the current condition of the property.
“I know y’all are sitting in tough seats but there are tough seats up here,” Bailey said to Akhtar and family. “I love that these guys are as passionate, they want a partnership and feel this is a start. It just seems like in 10 damn years there should have been a partnership.”
Bailey said he and City Manager D. Sosa are currently eying a project to repair and revamp Cambridge Square Apartments, something he feels should have been done years ago. New owners are looking to pump in more than $700,000 into Cambridge Square. “I think you’re going to have to make some changes.”
The request for a specific use permit will next go before the planning and zoning commission for discussion and consideration. Afterwards they give their recommendation to city council and a final decision is expected within a month.
E-mail: mary.meaux@panews.com
Twitter: MaryMeauxPANews

NEDERLAND — Life’s journey can sometimes be bumpy and filled with obstacles so it takes a strong individual to find... read more