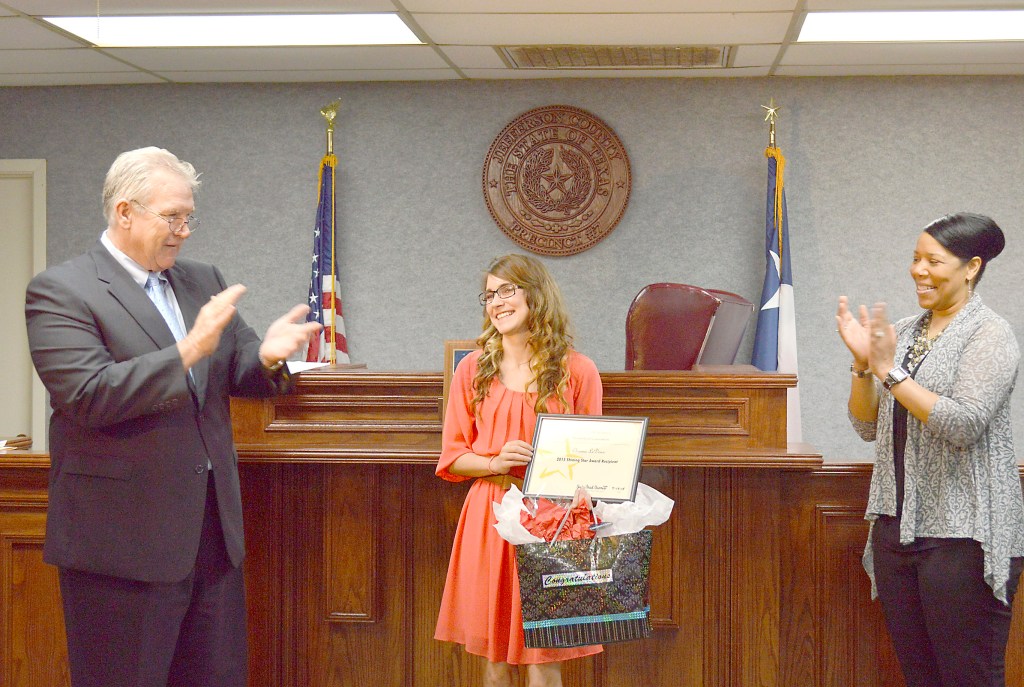 Port Neches-Groves High School senior Channa LeDoux, center, receives the Shining Star Award from Justice of the Peace Brad Burnett, left, and Lamar University instructor of social work Angeliqueca Avery, presents LeDoux with a gift bag during a ceremony at Burnett's courtroom last week. The award is given to students who overcome challenges and make a major turnaround.

NEDERLAND — Life’s journey can sometimes be bumpy and filled with obstacles so it takes a strong individual to find the right path to success.
Port Neches-Groves High School senior Channa LeDoux is one of those individuals who, when faced with challenges, made changes in her life that put her on the path to success. For that, she was recognized by Justice of the Peace Brad Burnett as the winner of this year’s Shining Star Award.
“I have seen many students make big transformations in the last few years. Many ‘Shining Star’ success stories really help motivate others to stay in school and reach their potential,” Burnett said. “They all make us proud, from receiving a heroic certificate of commendation by the U.S. Marines to moving on and excelling in college or their job. Each accomplishment is just as significant. Channa LeDoux has triumphed over hardships and will be very successful, you just watch and see.”
LeDoux saw challenges in life; she moved around a lot, attended a number of different schools and faced some family issues. At one point she decided to just stop going to school.
That’s when family intervened. Her brother, Jacob Watson, who is a high school graduate, and sister Carrissa LeDoux, who quit school young but earned a general equivalency diploma, convinced her that quitting school is not the right path.
LeDoux, who lives with older sister Carrissa LeDoux, went back to school and met with senior class counselor Emily Faircloth and assistant principal Jon Deckert and a plan was created to help LeDoux get back on track.
The soon-to-graduate LeDoux had failed a class due to attendance issues but this time around she passed the class simply because she attended and gained the knowledge needed.
“It feels very special, accomplished, to be able to say I am graduating,” LeDoux said following a brief ceremony in Burnett’s courtroom. “I want to give thanks to all who helped.”
Math teacher Allison Dodson was able to see the transformation in LeDoux. She penned a letter nominating LeDoux for the award.
“I am privileged to witness the transformation of a student with poor attendance and grades to one with excellent attendance and A’s. What an amazing feat,” Dodson said. “One particular moment that stands out was when Channa realized she was not merely scraping by, but was actually excelling in Algebra I. She turned excitedly to me to ask if I could believe she was doing so well, to which I relied that coming to class makes a huge difference. She agreed. Channa has always possessed potential to excel, she just had to unlock it.”
LeDoux’s family was in attendance at the ceremony.
“I’m very proud,” mother Tracey Hauck said. “I’m amazed she did this turnaround.”
Her sister Carrissa LeDoux is also very proud of Channa’s accomplishments.
“I’m so proud of her, especially since I didn’t finish high school myself. We moved from place to place,” Carrissa LeDoux said. “I tried to push her to go to school, tell her to try harder.”
Senior counselor Faircloth also penned a letter regarding LeDoux shining light onto the student who, she said, demonstrates a mature ability to balance academic pressures and extracurricular activities including multiple volunteer efforts with Ronald McDonald House, the Hospitality Center, Toys for Tots, Camo Christmas, Meals on wheels, Garth House, Almost Home and more.
“Adversity on many fronts has been an ever present companion of Channa; yet, she faces it with ability and determination to sensure a continuation of personal growth,” Faithcloth said. “She is inspired by life stories of others who have become successful despite their many struggles. She recognizes that she gets to decide who she will become and that her familial circumstances, past/present challenges and the judgment of others do not get to define her.”
Channa LeDoux is now ready for the future. She plans to attend Lamar University and pursue a degree in social work.
E-mail: mary.meaux@panews.com
Twitter: MaryMeauxPANews 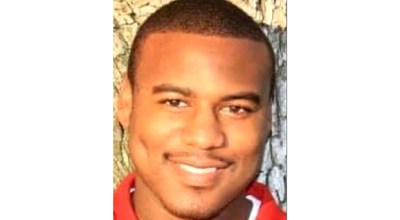 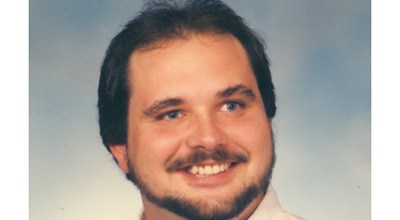 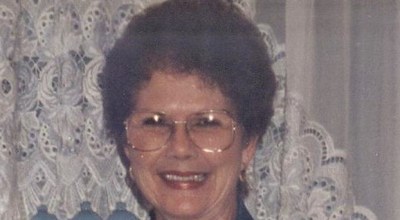