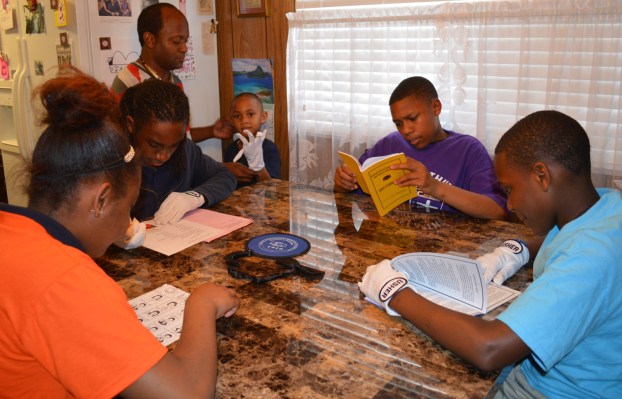 Citywide Junior Ushers may get their hands dirty Saturday during a crawfish/sausage plate fundraiser, but by Sunday those same hands will be white glove clean while the youngsters serve as doorkeepers to God.
Youth from all over Port Arthur are raising money to attend the state ushers convention in Austin next month, where they will learn the intricacies involved in meeting, greeting and seating those who come through the church doors.
Known for their staunch appearance — white gloves worn with a uniform and the requirement that they be silent throughout the service — the ushers utilize a series of 19 hand signals to communicate messages as varied as “come on in you’re welcome here,” to “it’s time to pray” or “pass the offering plate.”
“We’re sort of like a Walmart greeter,” Michael Navey, 40, member of First Christian Faith Church, said.
Navey has been an usher for the past eight years — not long by some standards, but long enough to know the affiliation is good for the church and good for those who take the time to learn the art of ushering.
“We are the first person people meet, we are the doorkeepers. Greeting somebody at the door, their facial expression tells whether they want to come in, so its our job to make them feel welcome,” Alice Sorrells, 64, of Port Arthur, said.
A member of True Vine Missionary Baptist Church, Sorrells has been an usher for 40 years.
On any given Sunday Sorrells is easy to spot. Her demeanor and her dress easily identify her as an usher.
Both men and women are required to wear white gloves, and uniforms — women, white dresses; and men, black suits with a white shirt and black tie.
For four decades her white-gloved hand has beckoned many through the church doors, and gently guided others once inside.
Naomi McIntoush, 55, and an usher for 25 or 30 years, described the responsibility that comes with the job.
“It’s a lot of work getting people to do what you want. We direct them to the seat, but sometimes they want to sit elsewhere. You are dealing with all kinds of personalities; got to lift people up,” she said.
Sometimes, an usher has more responsibility than just meeting, seating and greeting.
“When they get a little too much Holy Ghost, we have to calm a person down,” she said.
At that time, if an usher doesn’t have one in his or her pocket, they’ll signal for a fan, walk over and gently cool the overly-spirited churchgoer.
Other times, their job starts outside the sanctuary, when a mood is less than joyful.
“If you got a bad spirit, you got to leave it at the door,”  McIntoush said.
Because a trained usher can feel a bad spirit, they know to immediately what to do.
“We just pray within to get the bad spirit gone,” she said.
Jordan Francis, 14, from Great Macedonia Baptist Church, and his twin sister Janae, are looking forward to the trip to Austin, where they will hone their usher skills.
Jordan has been an usher since he was 9.
“I tried it for the first time and really like it,” he said.
He’s learned the 19 universal hand signals, and the usher way: To be silent, yet alert and respectful during services at all times, even in prayer when an usher’s head is bowed, while eyes remain open.
Janae Francis has also been an usher for seven years — a position she enjoys.
“I feel like I am contributing to the service,” she said.
Most Port Arthur youth ushers participate in church services on the first, third and fifth Sundays.
“It helps their character and keeps them in church. I think it helps them in school too. From us training them the right way, they don’t give teachers as much trouble,” Sorrells said.